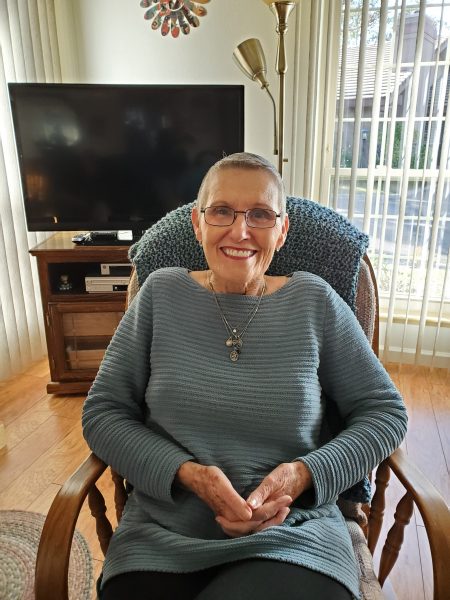 “Hi there Grapeleaf readers. I have been invited to share this short autobiographical sketch with you as part of Big Red’s ‘From the Pews’ column. Right now I am sitting in Gayle’s living room. Dale is relaxing in a recliner and Gayle and I are in rocking chairs pulled into a cozy circle. We have spent a few minutes in congenial chit-chat, and now Dale is looking at his little red notebook that he explains are full of prompts. Gayle has her notebook open and both of them are smiling and waiting expectantly for me to tell my story.

My maiden name is Martin. My parents and grandparents were dairy farmers in Modoc County, the northern most county in California. The nearest town was Lakeview just across the Oregon border, so  my brothers and I were born in Oregon even though we lived in California. I spent my first five years on that dairy. Although I didn’t milk cows are my young age, I have a vivid memory of how cold it was at 4:30 a.m. on a winter morning in Modoc County. Most of my memories are faint and dreamlike. I remember riding with dad along a levee on a horse named Buz. The horse was big, Dad was big, and I was little. I was scared, but sitting safely astraddle that big horse wrapped in Dad’s arms. What more could a little girl ask for?

There were two houses on that property. My grandparents lived in the big house and we lived in the small one. Grandma Martin had very nice things and everything was in order and immaculate. She ironed everything. I think she even ironed the towels!

At age five we moved down to Redding where dad worked in a gravel plant. We only lived there about a year. I don’t remember much about our circumstances, but I remember wonderful times with cousins. My dad’s sister lived in Redding and we spent a lot of time there with her. My brother Denny was only eighteen months my senior and my brother we called Scooter was three years younger. My aunty had three children about our ages, so that made six of us under that age of ten. Chaos reigned and someone was always in trouble. In fact, it was rare when just one of us was in trouble. Dad was the designated spanker. We children were spanked and no one thought to question if this was right or wrong. Once a girl cousin and I had misbehaved and knew a spanking was coming. We thought if we sat on the potty and looked pitiful it would deliver us from the deserved punishment. Not so!  Another time when we were all in trouble, we ran upstairs and began to cry when we heard dad coming thinking he wouldn’t spank us if we were already crying. That did not work either.:) That year in Redding I learned the joy of cousins!

When I was eight, we moved to Selma and that is where I grew up. Dad’ name was Russell and Mom’s name was Lillian. We kids sometimes called them Russ and Lil, which some folks thought was irreverent, but we knew when not to call them by their names.

Dad was a handyman and could always make things work even though he was not the finest craftsman. We used to say when describing one of his projects that he ‘Russed it.’

When Mom and Dad married, Dad had to agree to raise us Catholic, so we were sent off to church and dad stayed home and watched football. Mom always fixed a roast on Sundays, so the smell of a roast and the sound of football still makes me nostalgic for those perfect Sundays.

Looking back, I see that my parents were from different worlds. Mom was quiet, sweet, a refined Southern woman. Dad was a fix-it guy and a farm foreman who worked hard and expected us to do the same. Before I was nine years old I was cleaning house for seventy-seven- year old Cousin Lilly who lived down the road from us and by the time I was fourteen I was packing peaches in the packing shed across the street from us. Everything I do even now I do fast because packing peaches was piece work.

The first time I saw Mike he was a tall, curly haired Armenian with a huge afro. I found that attractive and we have been dating ever since. That was 1973. We were married in 1976. Abby was born in 1980 and James in 1983. Even though I loved the thirty-seven years working at St. Agnes as a pharmacy tech and then in supply chain and purchasing, Mike and my children are the high points in my life. Everything else revolves around those three life-changing, life-shaping individuals.

Mom divorced Dad five years before she committed suicide at age sixty-five. Dealing with mental health problems that led Mother to that desperate place was the most difficult struggle in my life, but today I am able to empathize with others and talk about death because I have been there.

8 thoughts on “Getting to Know Sue Karibian”