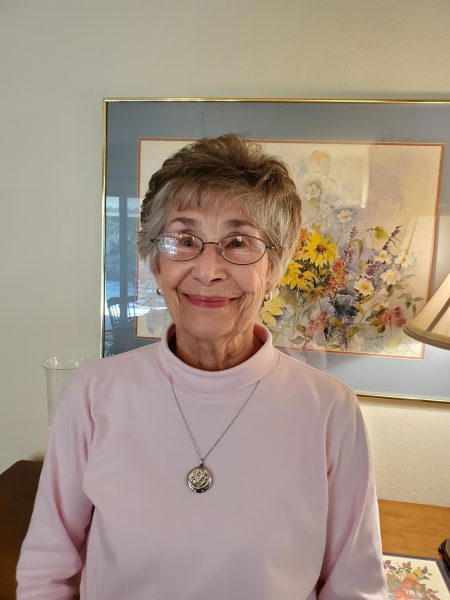 I hardly know where to begin with Donna. I guess I should begin with the beginning, but that presents a problem. Our purpose is to tell Donna’s story. Starting at the beginning seems simple enough. However, nailing down her story was not so simple.

So, let’s begin with her personality. When we rang the doorbell and were greeted by this gregarious, sociable, extroverted woman. She ushered us into her dining room for tea time which happens every day at their house around 3 p.m. I only had a nodding acquaintance with Donna. However, from the moment we stepped through her front door, and she graciously served us tea and mini mince pies, a clear picture of Donna began to appear—a woman who designed her own kitchen remodel, spent hours doing counted cross-stitch, and loves to read.

“Born in Calwa, I lived in the same house until I married Dick. The name Calwa comes from California Wine Association. Our house was next door to my grandparent’s home where my dad grew up. To say the least, I have deep roots in Calwa.

My mother was born in Stockton of Volga German immigrants and came to Fresno to work as an au pair. She and dad met through friends and were married in 1935. When I think of mother, I see a clean house and her scrubbing floors and polishing furniture. Every afternoon she “freshened up” just before dad came home from work, and dinner was on the table soon after he got home.

I was an only child until I was six and a half years old. I was daddy’s girl and often took his lunch to him. I was allowed to go into the empty houses he was painting and think about the possibilities of that house. Dad was a Boy Scout and loved camping and fishing which in turn played an important part in my childhood.

My earliest memories of church attendance are going to Sunday School in the basement of First Congregational Church on Divisadero and M Streets. There was an alley connecting our church to Temple Beth Israel. The Rabbi and our minister exchanged pulpits once a year and we children played baseball with each other in the alley not knowing we were of different faiths. A commitment to interfaith cooperation began way back then.

When I was ten years old, construction of Big Red Church was complete and the congregation joyfully moved into the current location on Van Ness Avenue. I was in the Children’s Choir which was 30 or 40 strong. We rehearsed every week and sang on special occasions. Dad was the Scout Master at the church for 24 years. While serving as Scout Master, my dad came home furious after an awards banquet because the benediction had been offered in the name of Jesus Christ. He felt that was a slap in the face for his Jewish scouts.

I met Dick as a senior at Roosevelt High School and he a sophomore at Fresno State. I saw his photo at a girlfriend’s house and fell in love with his eyes. While dragging the Main, we “happened” to see him and my girlfriend introduced us. On our first date he picked me up in his green ’46 Chevie, took me to a movie, and we dragged the Main. Dick and I have been married sixty-two years.

Dick began his career with PG&E, and his climb up the corporate ladder found us located in nine cities and fifteen different homes over the years. Each house we bought was an investment opportunity and sold for a profit when a promotion sent us to the next city. When I got discouraged, Dick would say we were beautifying California one house at a time. Along the way we acquired four sons, nine grandchildren, and two great-grandchildren. I never had a brother, so I didn’t know about boys and the games they played. I learned to arm wrestle and could compete for a while. As a child I could roller skate in the street faster than the neighborhood boys and in high school my passion was ice skating and these were things I could do with my boys. Dick and I always had a boat so it was water skiing in the summer and snow skiing in the winter. We have sold our boat, but each of the boys seem to consider a boat as a necessity for family life.

Eventually Dick retired and we moved back home to Fresno. I am often asked how I dealt with constantly moving from place to place. It is true that there was a line of moving vans in our driveway. I was always learning a new phone number and taking my boys to a new school. As a newcomer, I became a joiner. The first thing I did in a new town was join the PTA, the DAR, and various women’s clubs. As a result, I grew and learned and was enriched by all the people I met along the way.

Traveling has been an exciting part of my life with twenty-five trips to England seeing such highlights as the British Natural History Museum, a private tour of Darwin’s lodging, and the old British Library with a domed roof. And then there was the visit to the Singapore Animal Reserves where we saw all kinds of jungle critters. All in all, our travels up and down the state of California and to three continents have been rewarding experiences.

Dick and I were married at Big Red Church and our sons were christened there. I guess my faith might be described as radical. It is not based on Christian mythology or ideology. I believe in a basic goodness. I practice to the best of my ability Christian teachings and my goal is to always be tolerant of others.”

One thought on “Getting to Know Donna van Wyhe”