February 19, 2020 by First Congregational Church of Fresno Getting to Know You 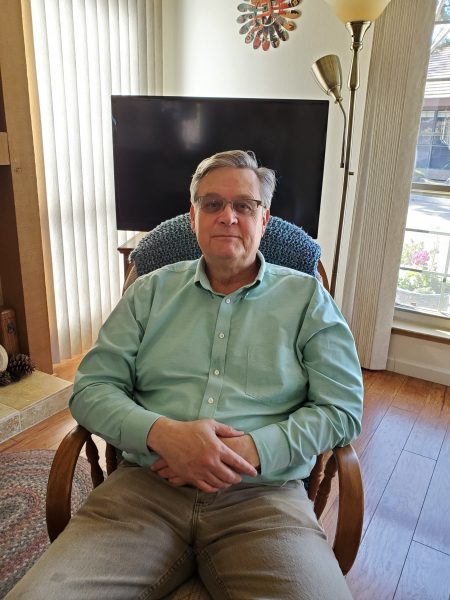 Our “From the Pews” person this week is Steve Hay. Steve and his wife Sue have been members of Big Red for just about two years, which in and of itself makes them unusual. I guess if there is a commonality among our church family, it is our diversity. Time after time I am approached by a long-time member who says, “Dale, I have known_____for twenty years and had no idea______.”   If I have learned anything writing this column, I have learned that we are more different than the same, and that we glory in our diversity. One casual glance at the gathered worshipers on any Sunday morning proves the veracity of the claim that we are open and affirming of everyone.

I have spent the morning studying Gayle’s notes and hardly know where to begin. They are so rich and diverse. It is obvious that my task is not so much to compose but to edit, not to create but to choose from the wealth of material that Steve provided.

Let’s begin with a brief etymology. The surname De La Hay was introduced in England after the Norman conquest of 1066 A.D. The name comes from an old French word meaning an enclosed forest. The name was reintroduced into England and Scotland by French Huguenot’s—Calvinist Protestants—fleeing religious persecution. In 1760 four of the De La Hay brothers arrived in Virginia and became the Hay family.

In 1820 one of those four Hay brothers moved to Kentucky and put down roots. Coming from those roots, Steve was destined to keep alive the Hay tradition of migration. He was born in Dayton, Ohio, where his dad was in the Civil Service. Dayton was a short stop, and Steve has only vague memories of that first house in Ohio that had a vacant long next door infested with green snakes. It was here that he had his first entrepreneurial adventure selling toys from the front porch.

At around age four, it was off to Germany and dad’s latest Civil Service posting. For Steve, it was a German kindergarten where he remembers marching around the school and being forced to take unwanted naps. Steve lived on the military base with his parents, older sister Julie, and middle brother Mike for three years. Their German housekeeper called Steve “the little monkey” because he would jump off the top bunk bed onto her back!  During those three years, Steve and family toured all over Europe in a Rambler station wagon. He remembers visiting castles where he and his brother chased lizards and choking on salt water while wading in the Mediterranean.

Your biographer has reached the critical stage in his abridged biography wondering where to go from here. It might be romantic to leave him wading in the Mediterranean, but Gayle will say, “You can’t leave him in the ocean!”  So, I will bite the bullet and go forward.

We next find Steve and his family in Fairfax, Virginia. In those next years he remembers preferring to explore the woods and Civil War sites than go to school. His parents divorced when he was in the eighth grade and while he was in high school, his brother Mike tragically committed suicide.

Steve’s coming of age consisted of college at East Texas University where he was in the ROTC and earned a degree in business, even though he was more interested in history and science. Then it was off to navigation school at Mather Air Force Base in Sacramento before being stationed in San Bernardino flying C141 cargo planes for his five years in the U.S. Air Force. Finally, it was back to Sacramento and a Master of Arts degree at Sacramento State where his last class—geographic information systems—was “terrific” and led to a twenty-year career working for an engineering company in Modesto mapping for cities and school districts, for pollution and environmental concerns, and for accident sites.

Steve met Sue on a Sierra Club hike on Angel Island. He proposed in October and they married February 14th twenty-seven years ago. They have been blessed with a son Ian who works in a microbiology lab and lives in Berkeley and a daughter Laura who is majoring in drama at U.C. Berkeley.

Steve is a confessed entrepreneur at heart beginning with selling those toys off the front porch when he was about three or four years old. Just out of the U.S. Air Force, he designed and marketed information videos. Later he wrote and sold job profiles to help high schools students identify prospective careers. He sold 600 of these programs but let it go because he did not want to commercialize it.

After his mapping career, Steve had a lot of experience substitute teaching and earned a teaching credential along the way. Today Steve teaches at a local charter school and one day a week teaches a science class in Hanford. Ask him about his recent class in frog dissection!

One of the last things we talked about was Steve’s website:  adreamanight.com. Steve is a writer and a poet. Recently he had a 4-bypass heart surgery and to express his gratitude he wrote on his website:

“For My Friends at Cardio Rehab:  Let the spirit move you, and have its way to polish you, set you and shine light into you that you send back into the world as a color that is oh so brilliant.”  Shay

This is just the last couple of lines from Steve’s missive for friends. I cannot imagine any words that might express the essence of this week’s pew person clearer than these.

I encourage you to check out Steve’s website and consider his dreams.