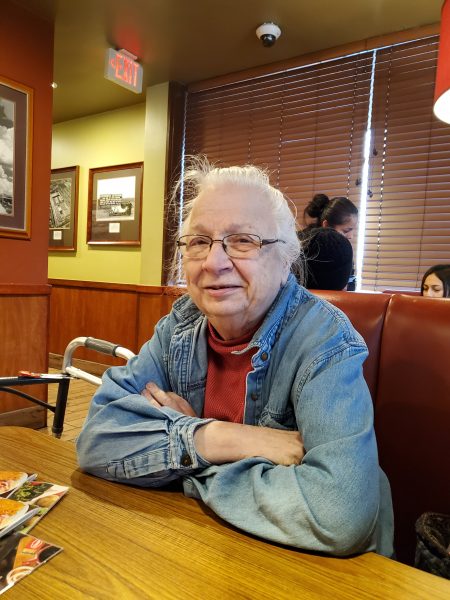 Good afternoon. My name is Helen Jane. It is Thursday, January 16, 2020. It is a stormy, rainy afternoon in Fresno, California. I am in my favorite Denny’s with Gayle and Dale. We are in a quiet cozy corner and ready to interview. I have a breakfast and they have pie and ice cream. Small talk is over, Gayle is poised to make notes, and Dale is ready to ask his first question. He wants to concentrate on my story with emphasis on my early years, my adult years, and my years as a senior citizen.

My parents were afflicted with “wander lust.” I was born in Alton, Illinois in 1941 and by age ten I had traveled around the country from coast to coast and border to border at least twice. Needless to say, until the seventh grade when my parents divorced, I had never completed a year in the school I started.

As I recall, I was enrolled for first grade in Cedar Rapids, Iowa. At Christmas we moved to Fresno where I finished the first grade. Fall found us in Eureka and me enrolled in second grade. Again about half way through the term we came back to Fresno, and I finished second grade at Jane Adams Elementary School. Third grade found me back at Jane Adams, but not for long. We moved across town, and it was Heaton Grammar School for the fourth grade. Things were looking good, and I started fifth grade at Heaton. That was short lived, and we moved to Merced where I finished the fifth grade. From there it was back to Fresno and sixth grade and I completed elementary school at Heaton. At this point in time the folks divorced and my life became more or less stable. After that it was Hamilton Junior High and Fresno High School.

When I was in eighth grade, Fresno Unified began an experiment with teaching algebra to eighth graders. I was among the hundred chosen. By our senior year, only twelve were left and I was the only girl.

This seems like a natural place to transition to those adult years. Along the way, I won a scholarship to the University of California, Berkeley. I moved for the first time since seventh grade and proceeded to flunk out, but that year at the university was not a loss. Wandering in the Music Hall after not making it into the university orchestra, I stumbled onto auditions for a choir and much to my surprise I was selected to be a part of this forty-member choir with only one other freshman in the class. I found my passion—music. I returned to Fresno City and then Fresno State to earn a Bachelor’s degree in music, a teaching credential and a master’s degree.

My first teaching position was at Washington Junior High School in Sanger. I had flunked English two or three times but agreed to teach it in order to get to teach general music and choir. I retired from that same school after twenty-eight years. After six years my general music and choir classes went away when an administrator hired a young man fresh out of college and left me with just English. When I dared to complain, the response was, ‘If you don’t like it, do something useful—get married.’ I watched my mom marry three times and that did not seem like an option to me.
With the door closed to my music classes, I took my love of singing to Renaissance Fairs as part of an a cappella group performing English country songs. We were known as the Jolly Tradesmen and traveled from fair to fair for twenty-five years. Retired now, five or six of us meet once a month for dinner and call ourselves The Trenchmen.:) Along the way I was also singing in and directing choirs in churches. Those two things rescued me from bitterness and satisfied my passion for singing.

My school was a hotbed of gang activity in Sanger and those children became my kids and marvelous relationships were formed. My two takeaways from twenty-eight years in the classroom are: 1. When a teacher you become, by a student you will be taught. 2. I am not here to teach you, I am here to help you learn. If along the way I saw one of my kids learn to think on her own and question me, I felt I had succeeded. I teach English, but I am not an English teacher was my motto and it served me well. Looking back at my adult years, it is obvious that I have seen and heard a lot. These experiences have left me determined to live in the moment—not in the past or the future.

I am a senior citizen and still love to sing—not solos, I’m a workhorse singer. I have been privileged to direct and sing in a host of churches with Christians of many different stripes. I believe we are called to make a joyful noise unto the Lord and the Lord does not care from which building it comes.
I am a senior citizen. I go to bed when I am sleepy and get up when I wake up.

I am a senior citizen. I read an average of two books a week—one fiction and the other non-fiction. If I don’t like the book I am reading, I stop reading it. I collect the books I read and have them on shelves lining every wall in my house.

I am a senior citizen. I like the Denny’s on the corner of Blackstone and Shields. I like to go there after Jeopardy at 7:30 p.m. I know all the evening staff and they know me and automatically bring me a pitcher of ice tea.

I am a senior citizen. I have had Siamese cats for fifty years. The present one is my Jewish mother.

2 thoughts on “Getting to Know Helen Jane McKee”