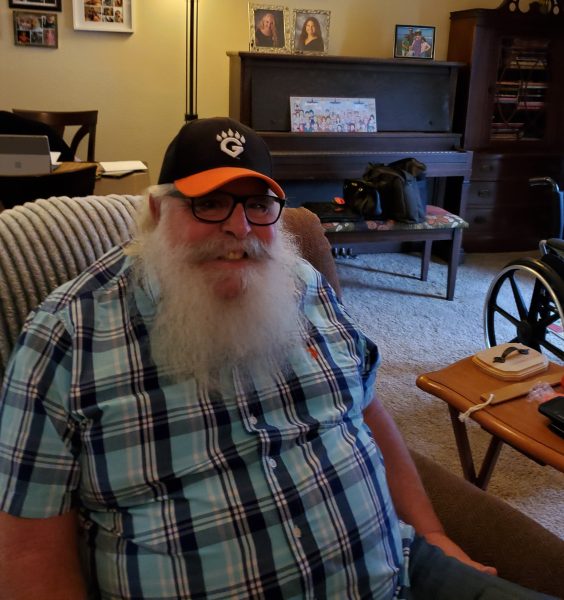 It is my pleasure to introduce Ken as this week’s “Pew Person.”  He has been an active member of Big Red Church for decades. If you do not know this fellow, you are missing an experience. Yesterday afternoon, with the holidays over, Gayle and I knocked on Ken and his wife Carol’s front door. There we came face-to-face with the epitome of Big Red diversity.

I consider myself a storyteller, but this guy is a master at storytelling which the following anecdotes illustrate. I suggested that we wanted Ken to tell us his story for the Grapevine. Carol responded, “That’s okay, Dale, but you will have to google it to see if he is telling the truth.”  And later in Gayle’s notes she captured Ken saying this: “We were at a party and I was well into the details of my story when my daughter Kim strolled by and without breaking her stride or cracking a smile said, ‘Don’t believe a word he says!’ 😊 Ten minutes later, I was putting the finishing touches on my tall tale and here comes Kim again. This time she stops and with hands on hips exclaims, ‘Did you folks not pay attention to a word I said?’  Needless to say, I was done for the night!”

Because Ken is a master storyteller, I only gave him four prompts:  Santa Claus, Camp Tamarack, the fall, and love. From his responses to these prompts, Gayle produced 19 pages of notes. Obviously, the following is a severely condensed account of Ken’s story.

SANTA CLAUS:  “When our daughter Amanda was in kindergarten at Roosevelt Elementary School, her teacher asked me if I would be the school’s Santa. I agreed and $75 bought me the biggest Santa suit available. It was too small, hot, and furry. The third year Carol made me one to fit, and her love has since stitched up five more Santa suits.

With my own suit, the calls mushroomed and private parties and nonprofits multiplied. I am Santa Kenny at Fresno Chaffee Zoo, Valley Children’s Hospital, and the Muscular Dystrophy Support Group. The Leukemia Lymphoma Society auctions me off for three visits each year. My sled makes personal visits to Parlier, Hanford, and Turlock. In Hanford I have been seeing a little girl named Izzy since she was three. To her, I am the Santa of the world. This year I was inspired by a 3½ year old boy who gifted me with the news he would not have to have a bone marrow transplant. And there is the family I have been seeing for twenty years. The children are grown but still want Santa at their family gathering. 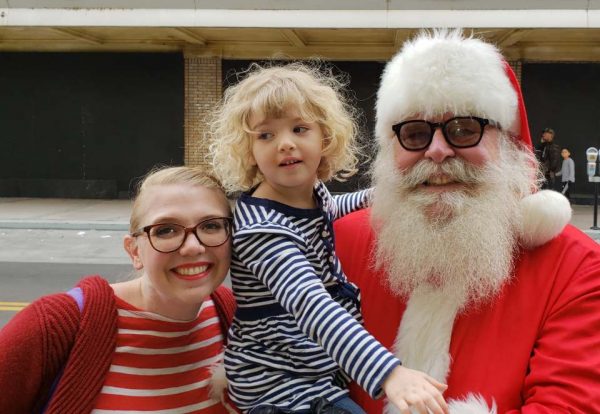 I have found children who are challenged mentally and physically to be the most appreciative of my visits. They ask Santa for simple things like a book or a doll—nothing expensive—just a bit of love to help them through the day. Santa goes home blessed after being with such children. And then there are what I call the ‘six-pack’ children. One whispers, ‘I need a gun to kill my brother.’  Another sobs, ‘My mama has cancer, make her well.’ And way to often, boys and girls alike plead, ‘My daddy is in prison, please send him home.’ In this group are also the children who no longer believe in Santa and sit on my lap just to say, ‘I don’t believe in you.’ My response to them is: then give me back the candy cane.”

CAMP TAMARACK:  “Tamarack has been part of Schoelen family life for thirty years. We wanted our girls to go to camp, so I volunteered to help. When it was going to be cancelled one year, I agreed to be the director. Over the years I have also served as chaplain, first aid dispenser, and cook. One year when I was cook, an ordering mix-up resulted in boxes and boxes of shredded cheese and zucchini. From that mistake, I created what has become a favorite and a legend—Zukenny.

I cured a homesick little girl of several imaginary hurts with the Star Trek ‘Bones’ treatment. When she really sprained her ankle, she only wanted the Bones treatment and assured me, ‘I won’t tell anybody you are Santa Claus.’   Another year a little Indian girl who witnessed a murder and was so traumatized she could not speak, dug up an arrowhead by the creek and began speaking. Such stories as these continue to draw me back year after year.”

THE FALL  “I am recovering from a fall suffered while repairing a roof at Camp Tamarack. More therapy and surgery are scheduled. My old friend ‘Tamarack’ taught me a most powerful and painful life lesson that day. Tempted as I am to describe in detail how Wade Hobson and Joel Bright refused to give up on me, tempted as I am to talk about the physical pain and agony of that horrendous fall on my head, I want to share my reflections on that experience.

‘Tamarack’ taught me that I am not indestructible. My old friend ‘Tamarack’ helped me to be content with circumstance beyond my control. Nature dumped me on my head and gave me a fresh understanding of what IS important. Flesh and blood people ARE important. Motorcycles in the garage ARE not important. Simple things like music and long-ago memories ARE important. Tangible stuff IS just not important.”

LOVE:  “On waking up from my life changing fall, my first words to Wade and Joel were, ‘Tell Carol I love her!’  And so I have learned again that love is the most important thing of all and doubly so when clothed in the form of a loving mate named Carol.”