Skip to content
The Big Red Church > Church News > Getting to Know You > From the Pews: Diddy Wagner 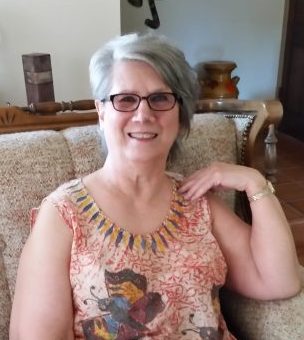 “Hello, my given name is Adeline. I was named after my dad’s mother, but my family has always called me Diddy (pronounced deedee).

With my daughter Jennifer, I made my first visit to the Big Red Church in January of 2019, and we were received into the church on February 24, 2019. It has been an exciting experience being a member of this church family.

Born on Father’s Day in the old St. Agnes Hospital, home to me was the farm way out on West Jensen between Fruit and Walnut. I lived there until I was married attending Catholic parochial schools and San Joaquin Memorial High School. My grandparents made the trip from Italy when they were in their twenties and passed a strong work ethic on to my sister Carol and me.
There were two houses on our side of Jensen, and a subdivision with lots of children on the other side. We lived on a farm and dairy with lots of cool things to do. My sister Carol—nine years younger–and I lived on the other side. We engaged in a serious sibling rivalry until Mother died and have now built a loving relationship. As the older child I was the ringleader of the neighborhood gang and in charge of making mud pies, and the truth is I was more attracted to the neighbors and families across the street than to my own family.

Moving on from birth family to my married family, I will tell you two stories that might give you an idea of what my marriage was like. In this first story, my husband-to-be and I were fighting about where to get married. He wanted a civil ceremony and I wanted to get married in a church even though I had not darkened the door of a church for years. The more we argued, the madder we got. I finally pulled the ring off my finger and threw it at him. I was afraid it would fall through the slats on the porch, but it didn’t. He picked it up and left. He showed up at work the next day, and after making sure I was not going to throw anything, he said, ‘Let’s go get married.’ I thought I had won, so I agreed and with another couple we drove to Lake Tahoe. We found a Justice of the Peace there and in fifteen minutes we were married. I was thinking: this is not the way it is supposed to be—no flowers, no music, no white gown, no priest, and no church.

The second story that was a precursor of our rocky marriage is about the honeymoon. The groom and best man dumped the bride and bridesmaid in a motel and spent the night bar hopping. You might say these two stories were harbingers of what was to come. Seven years later I was a divorced woman with a ten-month-old infant.

Looking back, it occurs to me that these two stories are also the foreshadowing of something wonderful. That ten-month-old baby was my daughter Jennifer, and she without a doubt prepared me for the good that was to come. When I was pregnant with her, I was walking around with a crown on my head. I was going to have a baby. Unfortunately, my husband and I continued our incessant battles. He wanted a boy and I wanted a girl. He wanted one name and I wanted another. And so the battles raged on.

Giving birth to Jennifer required a C-Section. When I first saw her swaddled in a blanket, one of her arms popped out. We could not decide if she was praising God or waving at me. She was sleeping through the night after seven days, but alas when she was a teen it was probably what hell is like. Today Jennifer lives next door to me, and it is good. Where we are now is a result of all that has gone before. After seven years of marriage, I was out from under the thumb of my husband, in charge of my own life, and free to raise my daughter. I grew up a skinny, sickly kid and had pneumonia when I was two months old. I wore the same size school uniform from the first to the fourth grade. I did not eat like a normal child, and it drove my mother crazy. The doctor finally told her to leave me alone and I would eat when I got hungry. There were a series of dead-end job that led to a forty-one-year career in a dental lab. I see my story as a series of precursors each fitting into the narrative which is my life story. They were not necessarily good or necessarily bad, they were just necessary.

Dale, you asked about my faith. Another story about Jennifer illustrates my response. When Jennifer was in the second grade, she came home devastated one day. Her boy friend had stopped talking to her. I asked her if she had prayed about it and she responded, ‘No, because God is too busy.’ My answer was, ‘No, Jennifer, God is always there!’ This answer to my seven-year-old daughter has become the bedrock of my faith.

One thought on “From the Pews: Diddy Wagner”