Skip to content
The Big Red Church > Church News > Getting to Know You > From the Pews: Jason Doggett 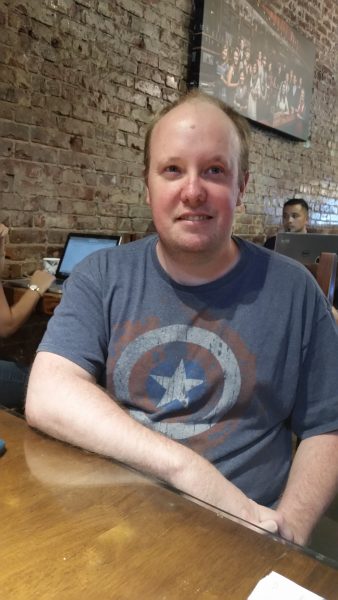 “Hello there, Big Red friends and Grape Leaf readers!  If you are reading this missive, just a few days since I stepped out of the pews to tell my story. Time has moved on and my words are frozen electronically on the page you are perusing.

My name is Jason Doggett, and I am spending the afternoon with Gayle and Dale. We have picked the hottest day of the year to meet. The temperature is expected to reach 106 degrees!  We are, however, comfortably settled in the Clovis Kuppa Joy Coffee House where it is cool and the atmosphere is pleasant and congenial.

Gayle has her notebook in hand, Dale has his prompts, and I have been instructed to talk and talking comes easily for me.

My surname is Doggett and is derived from the Medieval English “dogge” from which we get our word “dog.”  It was originally a nickname applied to someone with dog-like characteristics either complimentary or abusive. My favorite story suggests that the surname Doggett was associated with those whose profession it was to care for the gentry’s dogs—maybe something like dog walkers today. The first name to ever appear on tax rolls was one William Doggett in the year 1206. While I am speaking of ancestors, this seems like a good time to tell my Grandma Doggett’s story of the not so ancient Doggett ancestors. It seems that my Great-Great-Great Grandpa Doggett, known as Killing Men in the Back, lived in a cave in Sweet Water Texas with his wife, a Cherokee medicine woman.

I grew up on the wrong side of the tracks in Selma, California. We lived in an apartment and I stayed outside until the street lights came on. I only had three or four buddies and we like riding our bicycles through the neighborhood. I had any number of half brothers and sisters, but three special cousins made for wonderful family get-togethers and holiday celebrations. Because of these relationships, growing up was lots of fun in spite of crashed cars and ever-present drugs and alcohol.

After the divorce my mom married Robert George, and this man became my dad. He went to work every day and came home every night. I could always go to him and talk if I needed to. He taught me about computers and by the time I was eight I was tearing them apart and putting them back together. Oh, and we watched Star Trek every night for eight years.

Mom and Dad had two more children—a brother Robert George II, six years younger than me, and a sister Cheyenne two years later. Robert was an annoying little kid. We shared a bedroom, and he made a career of messing with my stuff. My favorite memory of my little sister was a photograph which I still have of her just after she woke up in which she appeared to have horns.

Although it was obvious to me by age five that I was different, I did not understand why. Questions dominated and answers were few and far between. When I was seven or eight, an uncle took me to a Southern Baptist Church and had me baptized. This only increased the intensity of questions and the pain of loneliness. Why am I so different?  Why is Larry Doggett my father? Why is being gay so not gay? In high school I attempted suicide. It was a life shaking event that caused me to say, ‘Enough is enough’ and I began the journey that allowed me to accept who I am.

My first open and affirming church was Wesley United Methodist. My eyes were opened and I learned to read the Bible contextually. I understood that it is not a rule book or a weapon of control and I have embraced the New Age thinking of letting go of hurts and old baggage. It was Wesley that I met Kirk and we have been partners for sixteen years.

I first came to Big Red with my friend Ann Cartwright. I liked it here. I especially liked the people. I immediately sensed that open and affirming was more than just a slogan.

Dale, back there in the memories section you asked for a precious memory about my mom. I asked to come back to that. I remember a night at Me-N-Eds when as a child I was allowed to make a pizza for her and how proud I was.

My all-time favorite pastime is to watch ‘I Love Lucy’ reruns. I dare say that you could turn on any of her shows without sound, and I could perfectly quote the scripts of Lucy, Ricky, Ethel, Fred, and guest stars.’

One thought on “From the Pews: Jason Doggett”