Skip to content
The Big Red Church > Church News > Getting to Know You > From the Pews: Patsy Finster 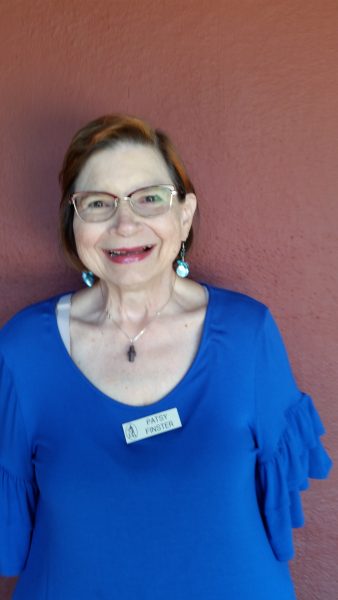 My name is Patsy and I am sharing a condensed version of my life story. I suppose that the best place to start is the beginning. I was born in Gloucester County, Virginia.

I was the first-born of a family with three sisters. My second sister was Linda and the third Deborah. As the oldest child I was always the responsible one. I endured—or suffered—from the oldest child syndrome. I heard more than once, “Patsy, you are old enough to know better than that!” And it was my responsibility to act like a ‘big’ girl.

Next came Linda—full of mischief! As the middle child, she was the trouble maker! The folks bought a new dresser for their bedroom with pretty little pulls on the drawers. Linda painted parentheses around each one. Mother was furious. Linda denied it. I got blamed and shamed for not being responsible. Despite such times, I loved her and miss her since her death in 1996.

The baby was Deborah, sweet from the beginning, still sweet, and still living in Virginia.

Mother’s maiden name was Betty Ann Miller. My favorite recollection is the family potlucks that brought us together on holidays. As you might imagine, this gathering of the clan resulted in a host of cousins. We were outside running and playing, the men sat inside waiting to be fed, and of course, the women were occupied with preparing a feast. Hosting these gatherings was passed from aunt to aunt. Mom loved the gathering of family at her house, but hated it when they all went home and she was left with the dirty dishes.

My father, Burl Rapp, was a Navy man. I remember the anticipation of him coming home. However, the joy did not last long because he usually came home drunk. This union lasted until I was five years old, and when I was nine, Mom married John Seawall.

I grew up in rural Virginia next to a Southern Baptist Church with a cemetery. On the other side of our house was a small orchard and our neighbor’s house. I vividly remember playing softball in that small orchard. My neighborhood pals were Nellie, Wayne, Robbie, Mary, Hughie, and Nora. We grew up together, played together, and rode to school on the bus together.

I loved to read and still do. A quiet place with a book has always been one of my favorite things. The graveyard beside the Baptist Church—that spot peaceful and isolated—was my go-to-place, my get-away destination when I needed solitude. It was there on a dreamy afternoon that I discovered the fantasy world of the Hobbits and the little girl Elanor named for a small, golden flower. Years later I named my first-born daughter Elanor.

Money precluded college, and money even left a car out of reach. But I was determined not to end up like my mother—that is divorced with three small children. I left home and soon had full-time employment and a part-time job. William and Mary College, my full-time employer, provided lodging at a secretarial boarding house which was my escape and a godsend.

My part-time job provided David Finster. He came in the costume store where I was a seamstress to shop and would not leave. Then he kept coming back with mundane questions. It soon became obvious that he had a plan, and it worked to perfection. We met on June 25th, 1970, we courted for three months, and were married in September of that same year and have been married forty-eight going on forty-nine years.

Immediately after we were married David was off to Vietnam. Upon his return jobs were scarce, but before long he was hired by the U. S. Postal Service. This was a good thing, but he was not happy there and responded to his call to ministry. Our first-born Elanor was born during the ‘post office’ period, and we called her the postman’s daughter. The second daughter Jenny came during the ‘ministry’ period and is known as the minister’s daughter. 😊

David’s first call was to the Japanese Congregational Church in Fresno when it was located in Old China Town. While he was serving there, the minister’s daughter Jenny arrived. From there it was off to Belle Fourche, South Dakota, for five years. The girls had chicken pox on that long trip to Belle Fourche. Jenny was four years old and never stopped talking the whole time. David and Elanor were in the moving van, and Jenny and I brought up the rear in the car. There were times when I seriously considered making David take Jenny in the truck with him. That pilgrimage today is a precious memory. David’s next call was eleven years in a church in Fremont and finally three years at Big Red before retirement.

Looking back if I had it to do over, I would get a better education. I am proud that at age sixty I earned my AA degree at San Joaquin Valley Business College. And of course, one thing I would not change is my marriage to David. As a minister’s wife, my goal has always been to be who I am and not just David’s wife.

I love singing in the church choir. It feeds my soul. And my faith can be summed up, ‘God is there.’

One thought on “From the Pews: Patsy Finster”