Skip to content
The Big Red Church > Church News > Getting to Know You > From the Pews: Lew Wagman 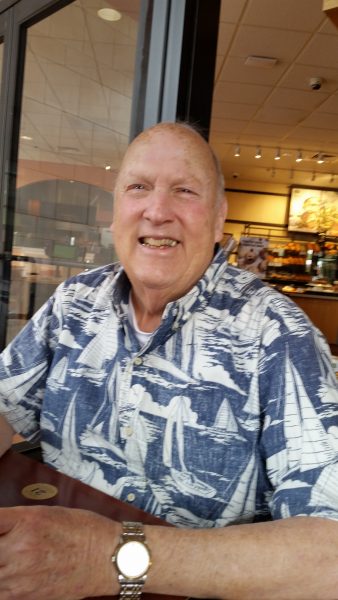 Searching for a “person from the pews,” Gayle and I found ourselves sitting across a table from Lew Wagman. I must confess that until this interview I had thought of him primarily as Bitsy’s husband. True enough, but this does not describe the man. Lew’s story is a collage, a hodgepodge if you please, of delightful accounts of his life. This chronicle does not begin to detail the stories that were captured as Lew shared with Gayle and me. I encourage anyone who enjoys a good story to have a cup of coffee with Lew.

“I was born in Pittsburgh, Pennsylvania, the fourth child. My father was an astronomer and head of the Department of Astronomy at the University of Pittsburgh. That explains my being born in Pittsburgh 😊 Mom was a great organizer. Before I could read, the chore list was color coded. I most dreaded Mom sending me down the street to ask the streetcar driver to wait for her when she was running late. Dad loved picnics, and we kids hoped for cloudy skies so Dad would not have to lecture at the Planetarium.

When it came time for me to go to college, it was Penn State halfway between Pittsburgh and Philadelphia. There was nothing to do there except study, and study I did. I majored in hotel administration. After graduation it was on to Chicago and food service companies. My oldest sister moved to Chicago with me and we shared an apartment. She found a job and a boyfriend. Sis was a teacher, I worked in a restaurant, and her boyfriend was the principal of her school. I did chores until my shift at 4 p.m., my sister came home at 4:30 p.m., and the boyfriend arrived at 6 p.m. We often laughed at what the neighbors must have thought! At 89 years of age, my sister still lives in the Windy City.

After five years in Chicago, I was offered a position in California and jumped at the opportunity. The next thing I knew I had rented an apartment in San Gabriel. One day after work I passed by the pool and there in a lounge chair was a young woman wearing a bathing suit and reading a big thick book. I had seen women in bathing suits but never observed one reading such a thick book. I slipped into something more comfortable and rushed back down to the pool. She was gone! In hopes of seeing her again, I became a daily visitor to the pool, but no woman with a big book was to be found.

I met Margaret and Don at the pool. They invited me to a party at their apartment. When I arrived, I stuck my head in the kitchen doorway and there was the mysterious big book woman! Come to find out, she was Don and Margaret’s daughter. She was fuming. She had a date that night and mom had commandeered her to help in the kitchen. Needless to say, that fuming woman was Bitsy. Our first date was a Fourth of July fireworks celebration at Santa Anita. Things moved quickly and casual dating soon moved to marriage plans—maybe in six months, maybe in year.

A career opportunity complicated our dreams when I was offered a position at Georgetown University Hospital in Washington, D.C. Next came agonizing discussions about our future. A long-distance relationship was unacceptable. We married in the fall and the same day left for Washington, D.C. We honeymooned in Las Vegas along the way and son Lew, Jr. was born during our stay in Georgetown.

As Food Services Director, I was pulled between my responsibility to the hospital and my loyalty to the food service company. I resigned and without a job we returned to Southern California. Turns out this was the best of moves. I became Membership Director for the Palm Springs Chamber of Commerce and taught at the College of the Desert. Next, I moved to UCLA Medical Center as Food Services Director. I rose through the ranks to become Administrator of the UCLA Medical Center. The highlight of those seven years was the birth of our daughter Jenny. More hospital positions were to follow. I stayed at the Methodist Hospital of Southern California seven years mainly because I could walk to work every morning. The pay wasn’t bad either 😊

After my retirement from running a hospital foundation, I walked past a help wanted sign in a Williams Sonoma shop in Pasadena. On a whim I applied and wound up in a basement listening to classical music and wrapping Christmas presents. It was not long before I moved upstairs and served as Assistant Manager. When we moved to Fresno to be closer to our children, I taught cooking classes at the Fig Garden Williams Sonoma. I retired a second time after seventeen years with Williams Sonoma.

I love to cook. Bitsy has a t-shirt that says, ‘I can cook. I don’t choose to.’  At potlucks people ask Bitsy, ‘What did Lew make?’

Retired now, I manage to stay busy. I volunteer at the Clovis Police Records Department. I have ‘called’ the Clark Intermediate School football games for eighteen years, but my great passion is music. I sing with the Fresno Chorale and the Big Red choir. Music is in my DNA. My mom was choir director and dad played the piano for Sunday School.”

2 thoughts on “From the Pews: Lew Wagman”