Skip to content
The Big Red Church > Church News > Getting to Know You > From the Pews: Char Lund 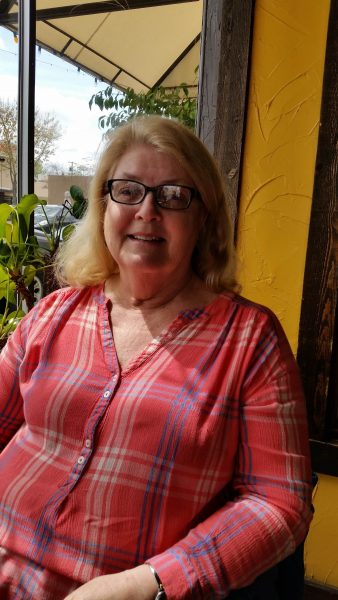 Stepping out of the pews this time is Char Lund—a most interesting woman with a story worth telling. Gayle and I met Char in a quaint tea shop in the Tower district—a first time experience for this country boy. I think I might learn to like it!

Char admitted to being nervous, but after I explained that we just wanted her to share her story the nervousness disappeared and for the next hour plus Gayle and I were treated to a condensed version of this woman’s life story.

“I was born in Oakland, California, and christened Charlene Olivia Lund. As a small girl, the children called me Olive Oyl, a nickname I hated. Needless to say, I did not use that middle name as I grew up. And yes, my maiden name is Lund. I have always retained it, and I shortened Charlene to Char and became Char Lund in my twenties. It works for me.

My family lived the first four and a half years of my life in San Lorenzo. I was the fourth of ten children. When Mom was expecting number five, we moved into a large house in the Oakland hills just above the public rose garden. It seems my folks were determined to fill that large house. We ten children arrived in batches of three or four often with several years between the batches. Basically, we were three generations.

The sister just behind me was like a twin. We spent our teen years finding ways to get into trouble. We loved to dance and often used the IDs of older sisters to go to bars and dance our little hippie hearts out.

Despite all the above, we were a very traditional family. The five girls were pink—meaning we were expected to help with the house and yard work. The five boys were blue which translated into sports and freedoms we girls only experienced on the sly. Dad came home to his slippers, newspaper, easy chair, and a home-cooked meal every night. While it is true that he was treated like a king at dinner time, he prepared breakfast every morning for us all. Mom worked the graveyard shift as a nurse and arrived home at 8 a.m. We children saw love and affection between our parents with their hugs and kisses. Living close to his insurance office made it possible for Dad to come home at 10 a.m. for a coffee break with Mom. They sat at the kitchen table talking and drinking their coffee.

Looking back my childhood was pretty much a fairytale come true. We lived in a beautiful house at the top of a wooded hill above a beautiful rose garden. I had a loving family and a neighborhood of children to play with. I attended good Catholic schools. All was well and my future was assured.

At fifteen my fairyland world began to collapse before my eyes as my mom and dad’s marriage began a long downward spiral toward an ultimate divorce. My way of dealing with all this was to internalize it.

I continued my education and while in nursing school at the University of California, San Francisco, I met my first husband. Having just finished medical school, he was coming to Fresno and I followed him. A Bay area girl, I almost died from the heat that first summer. I was twenty-four years old at the time and considered myself a hippy. This man I had married wanted an open marriage. I found out that in some respects I was still a good Catholic. My head could deal with it but not my heart. 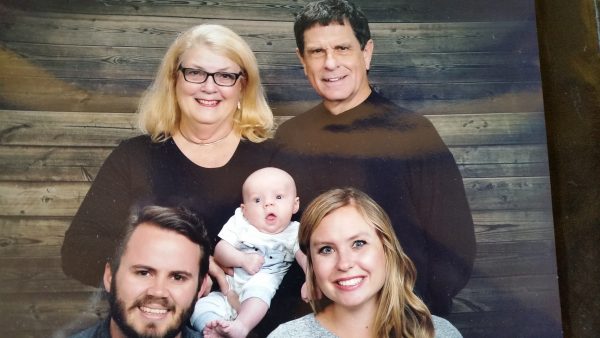 I met Tim in 1978. He grew up in Fresno, graduated from Fresno High, and got his Bachelor’s degree at Massachusetts Institute of Technology. Our mutual love of the outdoors cemented us together. We bought a house where we have lived for forty years. After overcoming my fears, we married and at age thirty-seven we were blessed with daughter Whitney. Today I am the grandmother of a beautiful five-month old grandson Archer. Let me show you some pictures that I just happened to have in my purse 😊.

I grew up a good Catholic, but my faith suffered as I began to question. When I went home and went to church with my folks, it seemed like a fashion show. After Whitney was born, I began to feel a tug in my heart. Looking for a church I could not find the right fit until Linda Berg’s daughter Emily invited Whitney to a sleepover. Whitney called seeking permission to attend church with Emily and her family the next morning. Concerned, I attended Big Red with them. Pastor Frank Baldwin’s sermon that morning was ‘Spirituality in Nature.’  I was home at last.

Later Shirley Carlson convinced me to become involved in a ministry—first Outreach and now Worship. I have sung in the choir for seven or eight years. My first love is playing the bells which I became involved with when Scott Horton arrived twelve years ago. Yes, movement and dance have always stirred my spirit, so being a part of Morning Star Dancers is a natural for me.”

Char’s chronicle ends here, but this story has many more chapters to be told.

One thought on “From the Pews: Char Lund”