Skip to content
The Big Red Church > Church News > Getting to Know You > From the Pews: Hiram and Nora Dewitt 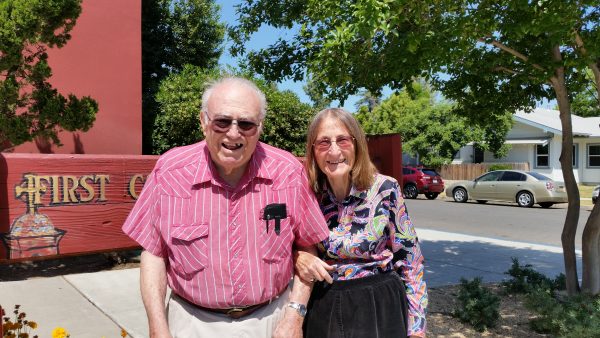 On a recent Friday afternoon, Gayle and I sat in Hiram and Nora’s front room lined with book shelves. While Gayle took notes, I engaged Nora and Hiram in conversation

“Nora, give us an account of your childhood and early years.”

“I was born in Hungary in 1940. We lived there under German occupation until I was five years old and the Russians were coming to liberate us. We fled into the Tyrolean Alps where we lived for about a year. Then we were adopted by a farmer in Bavaria where we remained until I was nine years old. I attended German schools and learned to speak German.

In 1949 our family was allowed to migrate to Australia. It was a long six-week journey by ship to Sydney. The first year we lived in a refugee camp where I attended fourth grade and learned to speak English. We became citizens and moved to Brisbane where I grew up. I eventually attended the University of Queensland where I earned a PhD in microbiology.”

“Nora, tell us about your folks.”

Dad was an industrial designer and a violinist specializing in Hungarian Gypsy music. Mom was a hard-working housewife specializing in love and care for her family and worked in a spinning mill turning cotton into thread. Dad suffered a heart attack and died at age fifty-nine. Mom lived until she was eighty-nine.”

“Hiram, will you share some anecdotes about your childhood and early years?”

“I was born Hiram Seligman in San Jose where the family lived briefly. We returned to Dinuba where my father was born in the 1890’s. Dad graduated from University of California, Berkeley, and went to medical school at the University of California, San Francisco. He hung out his shingle and became Dinuba’s town doctor. He delivered Richard Galloway, the organist at Big Red for forty years. After my father’s death, the family name was changed and I became Hiram Dewitt. My mother was an immigrant from Canada and married the town doctor. She was an educational nut pushing all 12 of her children to get higher education. She herself received a Master’s degree in mathematics from U.C. Berkeley where I am also an alumni”

“It was the ideal place for a child to grow up. We lived in a ranch house just outside town surrounded by vineyards and orchards. The irrigation ditches that brought life-giving water supplied an endless source of adventure for little country boys—everything from swimming to catching polliwogs. My best friend was a Filipino boy whose parents were field workers, and I guess I liked his mother best because she made sticky rice and I loved it.”

“Nora, tell us about meeting, courting, and marriage.”

I was on my way to London for a conference. We made a stopover in Tehran. The exiting passengers deplaned and new ones took their places. I was watching idly when down the aisle walked the most gorgeous red-haired man I had ever seen. I began to pray he would sit in the vacant seat next to me. He did! This was the beginning of our courtship. We met again in Northern California where we spent a romantic day in San Francisco. Three years later we reconnected. We lived together in Rome for sometime and decided we wanted children. We married in a civil ceremony in London and then returned to Rome. Raised a Roman Catholic I wanted to be married in a church, so we were married again in a 13th century cathedral in a little town near Rome.”

“Now let’s talk about the kids. Nora, you go first with Sophia.”

Sophia was born two months premature and spent a month in an incubator. Visiting Hiram’s mother in Fresno when she was one-year-old, she was diagnosed with cerebral palsy. With that news, we decided to stay in Fresno and moved into a house across the street from Hiram’s mother where we still live. I am proud of Sophia. She earned a Master’s degree in Divinity at Emory University in Atlanta and is an ordained minister. She lives in the Bay area and has an excellent, good-paying job.”

Our son Zoltan named after his grandfather is four years younger than Sophia. He has a Master’s degree in computer technology and works as a computer programmer in Mountain View. He lives in San Francisco next door to the Golden Gate bridge.”

“What about your ‘middle’ years?”

Nora: “Good neighbors, my thirty years working as a microbiologist in the lab at Valley Children’s Hospital, my children, my home.”

Hiram: “The teaching profession that allowed me to spend many hours caring for Sophia. Those middle years were peaceful and rewarding.”

Nora: “Good and bad. I am seventy-nine years old and consider myself lucky. There are aches and pains, but I have Hiram, children, church, friends, and my home. All in all, aging is not too bad.”

Hiram: “So many I have loved have passed on due to aging. I am of two minds—don’t worry about dying and worry about it. For me, it is a mixed experience.”

Nora: “My faith is belief in an afterlife. I am looking forward to seeing my mother and father.”

Hiram: “Faith is that something you believe but cannot prove.”

“Faith is twenty-four hours of doubt and one minute of hope.”

5 thoughts on “From the Pews: Hiram and Nora Dewitt”