Skip to content
The Big Red Church > Church News > Getting to Know You > From the Pews: Pete Espinoza 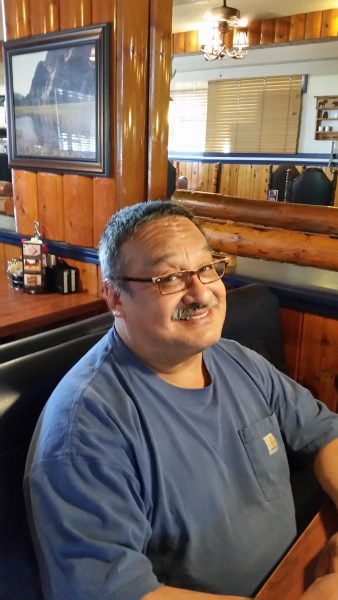 We met Pete at a local restaurant where he had graciously agreed to be interviewed. Pete is friendly and conversational—a natural storyteller. From this point on you will hear only Pete’s voice.

“My given name is Guadalupe. Saint Guadalupe, Mexico’s patron saint, first appeared to an indigenous person in what is now Mexico City—one the most famous and  visited shrines in all Christendom.

I was born a sickly child and almost died at birth. My father prayed to Saint Guadalupe for my life. I survived and the saint was given credit—a cause for rejoicing except for the fact that my mother’s first husband was named Guadalupe. This infuriated my grandma. She vowed not to love dad or his children. I hated my name. My nickname which I could not speak in public sounded like Pete, so in the first grade I became Pete

I was born in Hardin, Montana, on November 12, 1955, the next to last of twelve children. Mom called the five children from her first marriage her first batch and the rest of us the second batch. She was always busy having children, so an older brother and sister found it their job to care for the youngest of us. Mother’s first-born son Nick became the barber for all of the boys. I hated it. He was rough and hurt me. Looking back, he was probably not real happy about giving all of us squirming boys our haircuts.

We lived two miles from our nearest neighbor on a gravel road several miles from town. There was only one other Hispanic family in Hardin—my uncle, aunt, and a bunch of cousins. I did not notice any prejudice until one day in the fourth grade. Mother always packed some goodies in my lunch pail, and I liked to share with my buddies. On this particular day, I found a sucker in my lunch and I gave it to a friend. I watched him throw it away after another classmate said, ‘Don’t eat that. That kid is a Mexican.’

Let’s talk about my mother. She worked hard and made two families one. She instilled in me a sense of belonging, emphasizing that I had a right to be here and that I was to ignore prejudice. She not only preached this but practiced it. The following is an example of how she taught us. As a large family many of the older siblings had left home before the youngest were born. One of my brothers married a white woman. At a family gathering for the first time I saw that white face among all the brown ones, and I exclaimed, ‘Auntie, you are white.’  Amid peals of laughter she replied, ‘Yes, I am, Pete.’

Dad was a farm laborer, and we lived in a house provided by the farmer who owned a sugar beet farm. We all worked side by side in the fields. Sadly, dad was an alcoholic. But that is not what I remember about growing up in that house. There was love there. On Saturday nights, we gathered as a family. Big band records were on the record player. Dad danced with mom, then they danced with all of us, and finally we kids danced with each other. As the evening wore on Dad would pull down his accordion and thrill all of us with traditional mariachi.

The grandma I mentioned before became a bitter old woman. Her husband, my grandfather, died on the day I was born, and it seems she never forgave any of us. When Mom was ill sister Pat, who was five and I a year older stayed with her. She did not feed us and we were so afraid of her that we took turns sleeping.

I first met Steve at a party. We shook hands, and it felt comfortable like we were old friends. A year later I attended a church service and there he was again. I knew why I was there. Metropolitan Community Church became my regular haunt, so much so that Steve accused me of stalking him. Finally, he invited me to a poker party at his house. I baked him a batch of chocolate chip cookies, and he became the only person I ever baked cookies for. Steve and I were together for twenty-five years until he passed.

Metropolitan Community Church closed it doors, and we came to Big Red—an easy transition for Steve but not so much for me. For a while I wondered if I was perceived as gay, Mexican, or a short guy. The turning point for me was when Faye Saxton chased us down one Sunday and invited us to join the choir.

My mother always told me that I was different and to be myself. To remind myself of who I am I sometimes dye my hair a different color for every season—green for spring, yellow for summer, orange for fall, and red for winter.

8 thoughts on “From the Pews: Pete Espinoza”