“Dale, I have Parkinson’s disease. It’s no big deal!  I am not disabled, I am not a victim, I am not handicapped. I just have Parkinson’s. I have what is called the slow-acting kind which means that I will probably die of old age before Parkinson’s kills me. I am just getting old faster than I anticipated.” 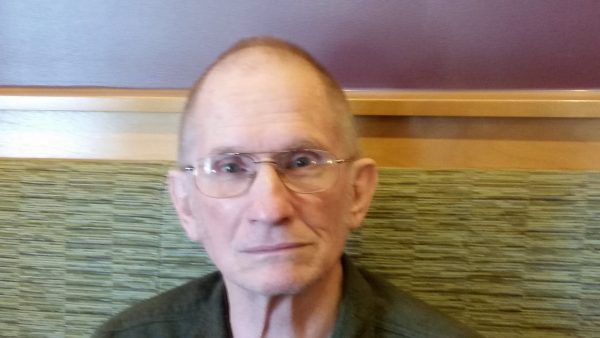 I have sat in the row in front of Winston at the Big Red Church for almost three years. We greet with a “good morning” before the service begins. We do the Peace of Christ thing every Sunday. I recognize him as a dapper, well-dressed gentleman with a hat, tie, and suit which is basically all I knew about this week’s “person from the pews.”  I did recognize that he had Parkinson’s and thought it might be an elephant in the room in our interview. The above paragraph eliminated my concern about elephants.

“Dale, I was born in Placerville, California where my dad was running a CCC (Civilian Conservation Corps) logging camp. It was not long before the beginning of World War II. Dad joined the military and I became a military brat. We moved on the average of once every three years: Washington D.C., Japan, San Francisco, Germany, Sunnyvale and more that run together in my memory. We arrived in Japan during the occupation. I was used to being in places where people lived in houses. I was profoundly affected by the sight of starving people living in the streets.

I was six or seven years old when we reached Washington, D.C. One wonderful morning it snowed. Our house was on a hill and the road was closed. My mother told how I ate my breakfast, grabbed my sled, rushed to the top of the hill and continued up and down the hill all day long. I came in for dinner only with darkness. I took a few bites of food and fell asleep with my face falling in my plate.

In Germany we had access to a military ship on stand-by basis and were able to travel for free and see much of Europe. That was truly exciting and an educational time for an Army brat.

I guess the most memorable time for me, as well as the first time we stayed anywhere long enough for me to feel like I actually belonged, was San Francisco. It was there that my sense of family and security first took root. I remember stockings stuffed with oranges and candy for Christmas. Military pay was not high then but looking back I realize that if I wanted something, I got it. Christmas morning my two sisters and I were not allowed downstairs until mom and dad had coffee. After what seemed like an eternity they called and we stormed down the stairs to the glories of Christmas.

You know, Dale, it seems passing strange that you can grow up in a home so filled with love that you do not realize how short you were on stuff. My mother was always there for me, and I miss my dad. I guess as I reflect on the matter, I was never short on the essentials in the loving home my parents provided.

In San Francisco we lived on a dead-end street that backed up to the Presidio. My friend Bill and I, with other boys, rode our bikes there and played at knocking each other over. Boys do stupid things, but if you survive those stupid things they provide wonderful memories.

I see you glancing at your watch, but I would like to tell you about Nancy. I must admit that marriage and love were not real successful endeavors until I met Nancy. I had been married and divorced three times when we met. Nancy died from leukemia in 2001. She was and still is the love of my life!

When I met Nancy, I was studying to get a Bachelor of Science degree in nursing and working part time at the hospital where Nancy was an occupational therapist. Work and education demands separated us for almost three years. Then on a new job and at a new hospital, I was walking down a corridor and heard her voice. I walked in the room where she was. She had time and we went for a cup of coffee. That was my undoing!  I can truly say I fell in love for the first time that day. During our years of marriage, we sat down together everyday after work with a cup of coffee and talked about serious things and laughed about silly things.

Nancy was boss. Once in a fit of anger I started to go and bang on my neighbor’s door. She said, “Winston, come back.”  I kept going. She said, “Winston Lewis Field, come back.” I came back. It was then I started listening to her. She taught me to not try to solve her problems—in other words to give her space. She taught me to be a man not just a tall child.

Dale, Nancy was and still is my rock. I must, before I’m through, mention my cat Genevieve who died at age 18 with all her teeth. She helped me with all my grief when Nancy passed.

There have been a lot of folks in my life. Some have hurt me, but most have been a blessing and helped as I made my way. I can look back today and say it has been a hell of a trip.”