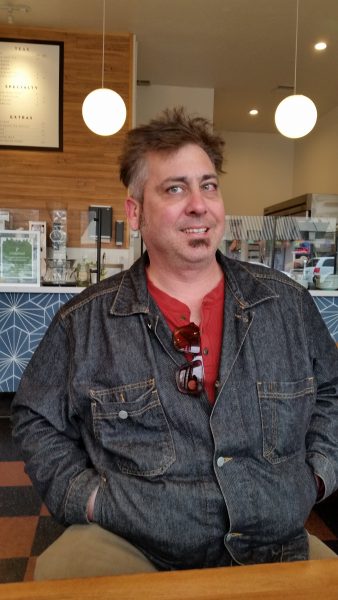 This reporter first met Sandy at the various volunteer functions of the Big Red Pantry Ministry. He is there every time there is a project, and he works tirelessly doing any and everything he is called to do without question or complaint. He did, however, confess that he is not keen on meetings so does not attend them.

Gayle and I met Sandy at a coffee shop in the Tower district one day last week. I was especially excited about this interview and Sandy seemed nervous at the outset. I suggested that we were there to encourage him to share his story with the members of Big Red. His response was, “I can do that.” And with the icebreaker out of the way, Sandy began. He is a natural storyteller.

“Death and illness have played significant roles in shaping the contours of my life. When I was in the fourth grade my brother died. He was three years older than me. We were Andy and Sandy, and we were buddies. Of course, I knew he was sick, but the thought of cancer taking him away was beyond my comprehension. He was my big brother and a star baseball player who still holds the record for home runs, with a trophy to prove it, and an annual Andy Klassen award still given for home run hitters. On the day Andy died, my folks told me that he would pass that day and gave me a choice: go school or stay home. I went to school.

Shortly after Andy’s death, I was diagnosed with a tumor at the very core of my brain. It was determined that the tumor was not growing and except for minor seizures from time to time, medication held the cancer in check. That changed drastically at the beginning of my junior year in high school. The tumor was growing and the prognosis was not good. Local doctors were anxious about doing the surgery because of expected side effects. An aunt who was a nurse in the Bay area talked to a surgeon who was optimistic about the results and did the surgery. The operation was a success, the doctor let me keep my green Mohawk, and we celebrated Christmas that year on my hospital bed. I came home and continued high school eventually graduating from Kingsburg High School.

Today I am half blind. The peripheral vision in my left eye is gone. For instance, as I sit here facing you and Gayle, I can see her and not you at all. Of course, when you think about it, not seeing you is not necessarily a bad thing. However, being half blind ain’t easy! I went to the Fresno Fair this past October and saw the big welcoming sign ‘Fresno Fair’ as ‘no air.’ Most of the time I have to read backwards and then forward again. On the way here, I saw a dog being led by a ghost—or so it appeared. The dog was there and a leash was attached to his neck, but no human was to be seen as the leash disappeared up into thin air. This is weird but real. I live in a ghost world.

My grandpa was born in Russia the child of German Mennonites. On a Mennonite boat he traveled to the United States with other farmers and settled in central California. I remember working in the packing shed on grandpa’s farm in Dinuba. My grandma spoiled me and let me come in the house for a special lunch while the other hands had to eat outside.

I was born in Fresno and we lived near Barstow and Maroa before moving to Kingsburg. A vivid memory of Fresno is of climbing fig trees on West Shaw and Valentine. I grew up in Kingsburg where much of my adventurous spirit was developed. I rode BMX bikes and skateboards. I went swimming in the Kings River. A favorite game was to walk out on the trestle and leap into the river just in front of a crossing train.

Dad was a long-haul truck driver and tagging along with him was the greatest of adventures. I loved sleeping in the sleepover compartment behind the driver’s seat. But best of all I relished eating in greasy truck stops along the old 99 Highway.

My mom held down a full-time office job, but her real occupation was to hold us all together as a family. She specialized in calming dad down and was an expert in stabilizing me. I was a mess and broke the law a few times.

I am always searching for new adventures. I have two great passions: concerts and traveling. Because of being half blind, I travel by bus and train and stay in hostels. My handicap has turned into a blessing because I meet people from all over the world. My next trip is Monterey and Salinas. In Salinas I will adopt two Peking ducks for pets. My hobbies are movies, gardening, and reading Kindle books.

I love Big Red and the opportunities and adventures that it provides. My first contact with the church was the Gay Pride parade with so many Big Red folks marching, and I thought this must be a neat group of people. I attended and found that is true.

You asked about my favorite food. Since I am on a diet, I guess right now I like best of all spinach and green tea.”

This last response was delivered with a perfectly straight face. Your faithful scribe does, however, suspect that Sandy was pulling my leg. Spinach, really?!

One thought on “Getting to Know You: Sandy Klassen”