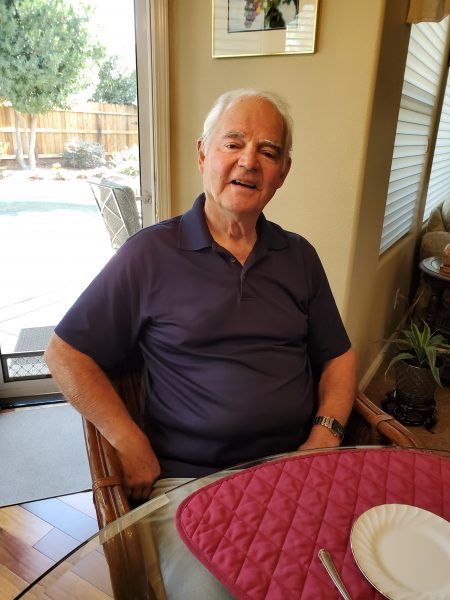 I am happy to introduce today’s “From the Pew” person: Ron Atteberry. He and his wife Shirley were among my first acquaintances at Big Red. In the beginning I would have described Shirley as extroverted and social and Ron as introverted and reserved. I had Shirley pegged right from the get-go. 😊 Ron is a different kettle of fish. Although introverted and reserved he is a man not quite as reserved as one might think!

Recently Gayle and I knocked on Ron and Shirley’s front door. After pastries and ice tea, I explained how we would proceed. “If I ask a question you don’t want to answer, just say “no.” Ron nodded in agreement. “Where were you born?” His deadpan reply “no,” caught me by surprise and was the first of many examples of Ron’s sense of humor and dry wit.
This storyteller prides himself on the use of poetic license. I quickly realized that I was in the presence of a man who tells his true stories giving his imagination full play. I like to feel in control when stories are being told, but I gave up and allowed this quiet man to tell his story in his own words.

“Dale, I was born in Amarillo, Texas.” I knew better, but even knowing he was setting me up I asked, “Where did you grow up, Ron?” “Well, sir, I haven’t grown up yet,” a line delivered with just enough Texas twang to say, “Haw! I got you again, boy.” This time I truly gave up and allowed Ron to tell his story in his own way.

“What I remember about Amarillo is that the summers were hot, the winters were cold, and I loved to play outside the year round. This love of the outdoors has been with me until this day. After Word War II, work was scarce to non-existent in Texas. We moved to Sacramento where I attended first grade. Sacramento was not a good fit for my family. Dad found a job with the railroad in San Francisco and we lived in Daly City where I attended school from second grade through ninth grade. We then moved to Sunnyvale where I graduated from high school in 1959.

Before I talk about college, just a bit more about childhood. In Sacramento we lived with my grandparents and I loved it. Their house was in the city with running water and an indoor toilet. Baths were in a wash tub on the back porch. The neighborhood was filled with children, and I spent every possible moment playing with those kids. In Daly City it was the same thing. Hours spent playing childhood games from tag and hide and seek to baseball in the street. A favorite memory, which seems almost unbelievable now, was riding my bicycle to the airport and pedaling out to the maintenance area where I was allowed to sit in the cockpit of those planes. Such a different word and a wonderful time to grow up worry free and playing. 😊

Back to college and the real world. The years, more or less, ran together as life happened. It took nigh on to thirty years for me to earn a Bachelor’s degree in Business and a Master’s degree in Systems Management. My first college experience was San Jose State and after three semesters studying electrical engineering, I knew it was not for me. I dropped out and joined the Navy. My plan was to see the world and get training in electronics. I never set foot on a ship, so I did not see the world, but the Navy taught me a trade, self-reliance, and discipline for which I am most grateful.

After the service I went to work for IBM and was trained internally as an IBM programmer. I spent seven years working for IBM and this experience opened the doors for all my subsequent work experiences. San Jose, Fresno, San Diego, Reno, marriage, children, divorce, education and a thousand other experiences have blended together to form the collage which is my life’s story.

I began losing my hearing while still in the Navy. Today without my cochlear implant I hear nothing. This implant has been a life changer. I had it implanted on my right side so I could hear Shirley talking as we traveled in our RV. (Dale’s aside: this is true love)
I met Shirley at a management meeting when I was Director of Information Systems for the school district and Shirley was an elementary school teacher. This meeting proved to be another life changer. We courted for a year and a half and were married in April 1993. I cried and my beloved smiled.

Forgive me for waxing philosophical. As a boy I had two great ambitions—major league baseball player and airline pilot. Neither of these dreams were to be. A pilot was out because of my poor vision and I couldn’t play baseball because I was klutzy.
I retired from Fresno County as Manager of Computer Operations. My retirement pleasures are spending time in our pool, barbequing, going on cruises, collecting and reading hardback thrillers with lots of Russian spies. I do crossword puzzles in ink and want to get back to playing golf.

I am drawn to Big Red by the music, the people, and am pleased that it is an open and affirming congregation that is as liberal as I am. It is a good fit.

I love Italian food and Shirley.

This is my story and I am sticking to it. 😊