Skip to content
The Big Red Church > Church News > Getting to Know You > From the Pews: Michael and Angel Medina 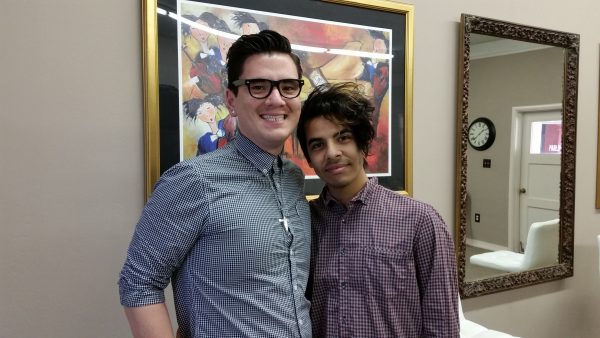 “If you want to get to know people, listen to their stories.” — Andrew Fiala

Gayle and I have just passed a delightful hour and a half interviewing Michael and Angel. Actually, I hesitate to use the word “interview.” Gayle as usual took copious notes and tried to keep yours truly from talking too much. She did a good job with the notes and not so good in limiting my rambling stories. Michael and Angel inspired me to share, and the three of us spent the time swapping stories.

“I was born in Whittier, California, on October 2, 1981. When I was four or five years old, we lived in an apartment that Dad managed. One of our favorite things was to watch mud wrestlers on T.V. Dad took his tractor out back and scooped out a large round hole. He filled the cavity with water and threw the excavated dirt back in. This created an amazing mudhole that was an immediate attraction for all the neighborhood children. The hole was not too deep, but we managed to get muddy from head to toe. A great pastime for kids.”

(This was a perfect spot to insert my own childhood mudball story involving a neighbor’s white-washed garage. Of course, when I got Gayle’s notes she had disappeared it!)

“My large extended family gathered for holidays and visits at Grandma’s house. This involved traditional meals and touch football games with macho uncles and cousins who played a rough and tumble game while I helped Grandma cook in the kitchen.

My mom took me to church and introduced me to music and the performing arts. Although an alcoholic, my dad always worked and we always had food and a roof over our heads. He has been sober for six or seven years. Unfortunately, his affliction was passed on to me. Today like him I am sober and active in AA, and with Angel’s help I hope to stay that way.”

“I was born in Sanger in 1999 and grew up in Parlier. My mother was in trouble with the law, in rehab, or doing odd jobs most of the time. My siblings and I basically grew up with my grandma serving as our mother. It was a tumultuous childhood, and we kids learned early on to tease and rough house. I remember one time when, as the youngest at that time, I was aggravating the older siblings and they told me that if I did not shut up they would duct tape me to a chair. I would not shut up, so they did. It was all in fun and they soon released me. This rambunctious play was a good education and taught us children to watch out for each other’s backs.

My father left when I was in the third grade. My siblings and I still refer to grandma as Mom. She worked in the Dinuba School District office, and after school I would go to the office and help her. Bouncing between Dinuba and Parlier for school left me with no set friends and a less than stable childhood. I graduated from Parlier High School in 2017, and I am now going to Fresno City College and studying American Sign Language.”

Michael: “We met through one of Angels former friends who complained about Angel. It was Fate that brought us together. I wanted to hear Angel’s side of the story, so I contacted him. I was pretty down and out. Actually, I was hungry. We arranged to meet at the Family Dollar Store. Angel asked me what I wanted and I replied, ‘Soup.’  So, on our first date Angel bought me soup.”

Angel: “When I was eighteen and had never had a real job, my mother gave me an ultimatum, ‘Angel, help out or get out.’  I had no one to turn to and no place to go. It was in this desperate state that I met a man who helped me with a job for which I paid a physically abusive price. It was in that Dollar store with Michael and later when we were cooking together, laughing, and being goofy that I found true happiness.”

Michael: “I told Angel that I was not ready for a relationship and making all these plans. And Angel impishly replied, ‘Along came a spider,’ and I was caught in his web. I married Angel because he understands addiction. I warned him from the beginning that I was carrying a heavy load of baggage. The truth is, since Angel, I grow happier and happier every day.

We live with Scott and Jason and are forever grateful that they are supportive of us in every way. They support my AA meetings and brought me back to church. They helped Angel let go of his feelings about not being accepted by the church. This has allowed him to come back to his Christian faith on his own accord where he rejoices in the respect and acceptance he has found at Big Red.”

Angel: “Our dream is to have our own place, enough money to be comfortable, and a sense of humor to last a lifetime. Today we are blessed to be best friends and that we have been granted another chance. Actually, blessed with a multitude of second chances.

We were married on November 24, 2018. It was the most beautiful wedding ever. Michael, who graduated from culinary school and is a chef, prepared a feast for the wedding party. We were surrounded by a host of friends and family. What a perfect way to start our life together!”

One thought on “From the Pews: Michael and Angel Medina”