Skip to content
The Big Red Church > Church News > Getting to Know You > From the Pews: Wayne Brown 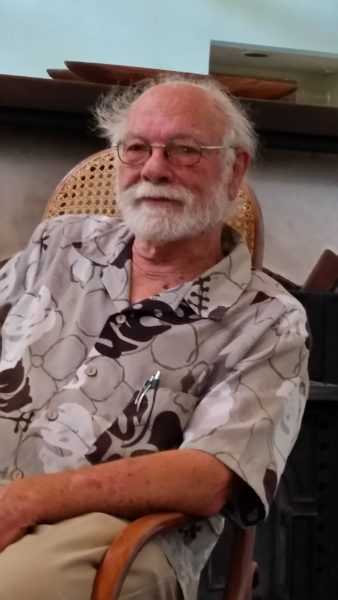 Gayle and I were on North Harrison in a lovely old Fresno neighborhood. We were searching for Wayne. I knew that Wayne was a member of the choir and his wife was Rosalie. That was the extent of what I knew about this man.

We eventually arrived at his home in a neighborhood of typically one-story houses. There we found a lovely two-story house, so different from the rest. Stepping from the sidewalk was a magical experience into another world. The path was arranged to make the diverse floral display standout with individual beauty.

I was distracted and Gayle kept nudging me along until we reached the front door. When Wayne opened the door and greeted us, I knew immediately that this was going to be a fun afternoon. We were ushered into a room with a high vaulted wood ceiling, lots of natural light, and a wall with books from corner to corner and floor to ceiling.

Wayne then disappeared into the kitchen, and handed me an iced drink made primarily with ginger and fresh lemons. I loved it. Gayle not so much! Wayne’s contention was that this concoction cured everything up to and including old age. And he very kindly suggested that from the looks of me, I needed a steady diet of ginger. 😊

We walked in at two p.m. and drove away just before 4 p.m. There was never a dull moment. Wayne told us his story in a transparent and entertaining manner. I cannot hope to make the story come alive as he did.

“My name is Corvin Wayne Brown. I was born in Broken Arrow, Oklahoma, where I only lived for three months and after that we moved often until I was around five years old when we moved to Schenectady, NY. We stayed there until I was 10 years old. The first year we lived in an apartment and I kicked a football that went down the chimney and smoked up the kitchen for which I received a ‘licking.’ Next came a house heated by coal. Dad taught me how to go down in the basement and light the furnace—a job he didn’t like to do.

Mom worried about going to heaven. She was a fundamentalist and specialized in tears and guilt. Schenectady was Italian, Irish, Polish, and us. So, on Monday through Thursday I had peanut butter sandwiches, but on Friday it was baloney. I paid for that. This experience made me vow to be an atheist, and in college I took up smoking to keep the fundamentalists away!
Yes, I am a poet. I compose poetry because I can and I need to. When I wake up in the morning, I want to face what I like: I feed the cat, stroll in the garden, feed the birds, and when the spirit moves me, I write a poem.

I once wrote a poem about Grandpa. The first lines were good, but I didn’t know when to stop. I gave it to my friend Philip Levine, a United States Poet Laureate, to critique. His response was, ‘The first lines are good, and the rest stinks.’

Sometimes I write about things I just can’t get out of my mind. When I was in high school, I shot a dove and could not find it. While searching in tall grass I almost stepped on a rattle snake. The snake had swallowed my dove whole. In anger, I killed the snake and to this day I can’t forget it. This line from a poem I wrote lives with me, ‘Still hear that rattlesnake like I hear the wind blowing spring leaves.’

I guess the best part about living in upstate New York was when we lived in a house with clapboard siding next to a virgin forest with a creek and blackberries. There in that silent forest there was no limit to the fantasies that a seven-year-old could dream up and make absolutely real.

In answer to your questions:

At age seventeen I left home to attend the University of Arizona in Tucson. It was there that I met Rosalie and found her to be the perfect antidote to my loneliness.

Rosalie and I came of age during our college years and at the height of the Vietnam war. It was a time of conflict and confusion. In 1964 I watched on TV with a fraternity brother as the U.S. Embassy in Saigon was bombed. In terror my friend exclaimed, ‘My dad works there.’ Luckily, he was not on duty at the time and escaped injury. Suddenly it was time for me to unlock the secrets of Vietnam.

On Mother’s Day, 1965, a former Sunday School teacher came home and was not the same. He related the horror of killing a nine-year-old girl and a seven -year-old boy. Finally, after much agonizing, I decided the Vietnam war was not a good thing.

Who influenced me more than anyone else? The Dalia Lama! I love his parables like the one about the mosquito that landed on his arm. ‘The first time I blew it off, the second time I flicked it off, and the third time I squashed it.’

More stories about my ancestors:

My grandma used to say, ‘We’re not Okies, we are Oklahomians.

My grandpa saw his father shot to death when he was sitting on the front porch. My grandparents took his widowed mother, who was known as Ma Brown, to live with them. After years of struggle, the folks built a new house with gas appliances and indoor plumbing. Ma Brown was okay with that until she learned that it had indoor plumbing to which she responded, ‘No way I’m going to move into a house with the bathroom inside.’

I came to Big Red because they took me like I am!”