Skip to content
The Big Red Church > Church News > Getting to Know You > From the Pews: Janet Mosley 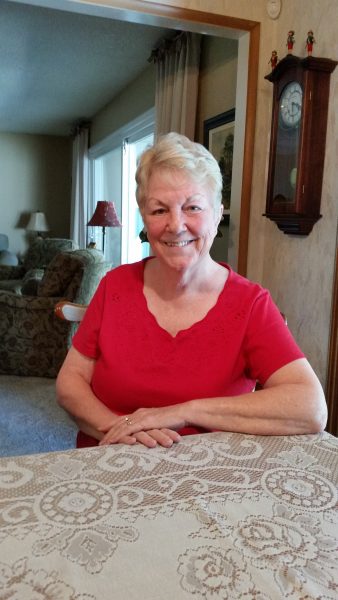 Sitting on Gayle’s kitchen window sill is a notecard. I have never read it but I have often admired the artwork. Upon inquiring, Gayle informed me that it was a note from Janet Mosley and that she is an artist. When we visited her for this column, I was privileged to view the oil paintings she has hung in the front room of her lovely home. As a person who can’t color between the lines, I was astounded to learn she had fifty-one oil paintings but had not painted in years. This scribe is here to tell you that if I had half of her talent, I would be in front of a canvas with a brush 24/7.

I was born in Wasco Maternity Home. With a doctor on call, the home was staffed by midwives. I arrived with yellow jaundice, and it was a month before I went home.

These memories focused my mind on childhood, parents, and siblings. Only one word can describe my mother—great! Her beautiful ceramics still decorate my home. I remember her making clothes for tiny dolls. My mother was a perfectionist. Every detail had to be perfect. This passion motivated every aspect of her life. Our home had hardwood floors, and I grew up watching her on her knees scrubbing and waxing those floors. We were five children constantly coming and going and yet she maintained those shiny floors. We never went to school or anywhere unkempt. My mother truly believed cleanliness was next to godliness. We girls had home permanents and clean clothes. She wore the same old coat for years, but we always had new ones.

Daddy drove a gasoline truck and then bought a Shell service station in Wasco. This when I really got to know my dad. With every oil change, he offered a free car wash. Guess who washed the cars—sis and me! We washed the outside, and when the car was on the lift we were lifted up with the car and cleaned the inside—a little frightening but exciting too. Gayle asked if our chores included cleaning the restrooms, and my answer was an emphatic ‘No, we did not do bathrooms.’

At home, dad loved to cook—especially he said when he was tired. This never made sense to me, but mother liked it. 😊 He took great pride enriching the garden and flower beds with leaf mold he dug up in the mountains and hauled home in his pickup.

We were five kids in a neighborhood full of kids. Many memories center around that cadre of children. We rode bicycles in the streets, skipped rope on the sidewalks, and swung from the monkey bars in the school playground. My sister and I had one pair of roller skates between us. We took turns on our sidewalk or we walked to the park—adjusting the skates with a skate key—and rolled around the perimeter. There was a store nearby where we bought ice cream and candy on hot summer days, and a bus driver on our block often gave us a ride home from town after unloading his last passengers.

As a middle sibling, I never suffered from middle child syndrome. The other kids said that I was mom and dad’s favorite. 😊 Favorite or not, I was also known as the ‘trouble maker’ and ‘black sheep’ of the family. When mother was upset with me she said, ‘Janet, I have a bone to pick with you.’ When she was really mad the conversation began, ‘Janet Mary, get in here.’ That is when I knew I was really in trouble. ‘So, Janet Mary, if this friend of yours jumped off a mountain, would you jump too?’ I could not resist. ‘Yes, Mom, I would have to jump to save her.’

When I met Robbyn at the swimming pool, I liked him immediately. He appeared so romantic. A double date was arranged, and it was everything a girl could hope for—jack rabbit hunting on his cousin’s ranch. Robbyn and I sat on the hood. I held the flash light but also got a turn with the 22 rifle and actually shot a rabbit. The boys slaughtered rabbits all evening and then he took me home. 😊 We went steady—mostly to drive-in movies. Robbyn was working in the fields from sun up to sun down and fell asleep on almost every date. I persevered! And after four years he finally proposed. In August we will celebrate fifty-three years of marriage. I have absolutely no regrets! There have been good times and not so good times, births and deaths, laughter and tears, joy and sorrow.

Looking back over my life, if I had it all to do over, I would go to college and be more patient with my children. I have lived with a loving man and raised two wonderful children. I have six dear grandchildren and a colorful rubber gecko from a cruise to St. Thomas that they all love. Several years ago, on a visit they hid it from me. Now it is a tradition—hide the gecko from grandma!

This seems like a good place to end. Thanks for listening to my story.”
P.S. I was a cheerleader for basketball in high school and runner-up for Snowball Queen. 😊

5 thoughts on “From the Pews: Janet Mosley”