Skip to content
The Big Red Church > Church News > Getting to Know You > From the Pews: Lisa Davenport 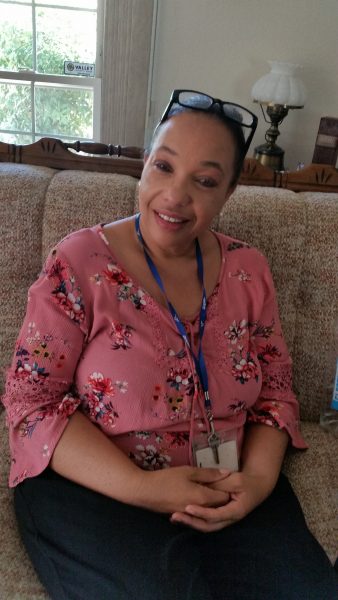 Lisa is the mother of nine-year-old twin daughters soon starting the fourth grade. She married for the first time this past April to Doug Nowlin. As a teacher, he told Lisa he knew and loved the girls before he loved her. When asked to explain her faith, Lisa replied “My faith is God-centered.”  And when asked about her biggeststruggle, she answered, “Being self-reliant instead of God dependent.”

Lisa, who has changed you the most? “Doug, who magically and accidentally appeared in my life to help me with the things I could not do alone, and my two girls who are constantly transforming my existence.

The above is a glimpse into the life and loves of this week’s pew person. Read along with me as Lisa unpacks the warp and woof of her life.

“I was born and raised in South Central L.A.—the worst ghetto in California! My father was a Marine when the armed services were integrated. He was not happy about it and when asked why, he answered, “Would you want to be in a fox hole with a white guy from Alabama with a gun?”  This is a man who loved to joke. My mother had him removed from the delivery room the day I was born because he insisted on telling jokes while she was in labor. Dad was black but could pass as a white. During the Watts riots, he was caught in a violent area and a white police officer stopped him and sent him on his way shouting, “What’s a white man doing in this neighborhood?”  My favorite story about Dad and race was the Christmas he played Santa in a neighborhood church and all the children said, “This is the real Santa because he is white.” He worked for many years as a station officer in the LAPD.

Mother was a beautiful woman. She looked like Lena Horne, but because she was black, she was not allowed to work as a model. However, because she had light skin, she could be an elevator operator at the Broadway Department Store. And that’s where a certain light skinned Marine with bluish green eyes saw a freckle-faced girl and fell for her!

My folks were special! Mom had the opportunity to buy a fourteen-unit apartment house. Dad said no, but conceded when she cried. This ghetto couple took second jobs cleaning offices at night to pay for that investment and for twenty years they put their pay checks in savings and lived frugally off the rental income. Dad was later fond of saying, “I’m a millionaire today because of Mother’s tears.”

I have two older sisters and I was a change of life baby. Mother was thirty-eight and thought she was having gas pains until the doctor disabused her of that notion. I weighed nine pounds ten ounces and my birth certificate is stamped “NEGRO.”  I tease my girls because this is not on their birth certificates. 😊

Although he was not a college graduate, my dad saw to it that his three daughters and his wife were afforded college educations. All four of us became teachers.

Growing up in South Central L.A. was not a fun experience for me. I was teased and taunted. I looked bi-racial when that was not accepted in my black neighborhood. I did not make sense in that environment. One boy threw empty cans at me shouting, “While my folks were picking cotton, yours were sitting on the porch.”

I was bussed to integrated schools where bullying and harassment were the rule of the day. In 8th and 9th grades I was sent to a private prep school two hours away in a good part of L. A. There were three or four black children and a hundred white children. It was the worst experience of my life. I had no friends except for Chastity Bono who let me sit by her at lunch. The school had an annual ski trip and a boy told me that I could not go because my lips would explode at high altitude. I felt like an alien from outer space. I was shunned by whites because of my blackness and rejected by my own people because I was not black enough.

Jumping ahead, I finished high school at Dorsey High on the west side—known as the better side of the ghetto. From there I was off to UCLA and a major in political science. I had been sheltered and could not keep a job until I interviewed and was hired by Compton Unified School District. This led to twenty years teaching even though I had not wanted to be a teacher. At one point I went to nursing school and worked briefly as a nurse, but now I am back to teaching in a Charter school and love it.

At age thirty-eight I faced a mid-life crisis. The clock was ticking and I wanted children. At forty I delivered a still-born child and at forty-three in-vitro fertilization and a sperm donor brought Faith and Grace into my life. In conversation with a friend not long ago, Grace said, “My Mom kind of made us up.”  The friend responded, “You were made by science.” Out of the mouths of babes!

If I were to summarize the joy that fills our life as a family, it would be Sundays around the table. This table commands a central place in our lives and is a metaphor of all that we hold precious. I cook, Doug does the dishes, and these hours are reserved for family and friends. Doug and the girls play cards and board games. I watch and take joy in the laughter and love around the table. Friends and extended family add to the camaraderie of table fellowship and it truly binds our heart in love.

3 thoughts on “From the Pews: Lisa Davenport”