Skip to content
The Big Red Church > Church News > Getting to Know You > From the Pews: Lucretia “Lu” Parks 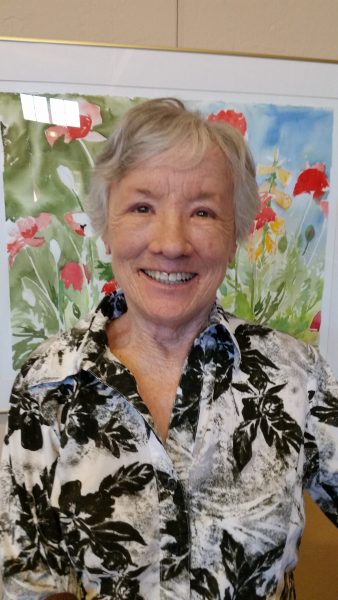 Recently Gayle and I went searching for Lu. We had her address on North Palm. As a native of Fresno, I anticipated no problem in finding her. Wrong! I drove by three times before finding her lovely home—a two-bedroom bungalow. This house is not restored—it is original from the shining hardwood floors to the perfectly preserved cabinets and woodwork. I was amazed! The front yard is tiny with steps from the sidewalk up to the front door. The deep backyard is a lush oasis that Lu says is becoming like the Winchester Mystery House as she makes changes and additions to the landscape.

After the tour of her house, we were introduced to her little dog Willow who only interrupted us once when she gently reminded Lu it was time for her afternoon snack of Kibble.
My first question was, “Lu, what brought you to the ministry and retirement here in this lovely house?” She answered, “Dale, I have traveled a circuitous road.” And we were off to the races as this fascinating woman recounted her life’s journey.

“I was born in Houston, Texas, the third of four children. My baby sister was born fourteen months later. Two born-out-of-season babies, we were not planned or desired. So close in age, we were like twins and spent our formative years in the giant oak trees on our property. I was named Julia Lucretia Hoke. My mother always called me Lucretia, but I am mostly known as Lu.

My dad was the smartest man in the world. Suffering from an eye disease, he was blind by age twenty-two. He achieved a Master’s degree. He was a scholar and taught high school history. Mother taught elementary school and often suffered from migraine headaches. I was her caregiver and loved her dearly. I worked hard to get good grades just to please her.
I was raised a Baptist and as a nine-year-old I first set foot on the winding, circuitous road that led me to the ministry. At that tender age, I was called to be a missionary and thus embarked on my odyssey to ministry.

After high school, I enrolled at Baylor, a Baptist university. With no missionary curriculum, I majored in math—another of those bends in the road. It was at Baylor that I met John and stopped circling and started spinning. He was meticulous, spiffy, and good-looking. He was a Presbyterian, and so I became a Presbyterian. We married and grew up together.

The next circle brought us to California where we adopted Jay and Ashley. John pursued a PhD, and I went to night law school. I wanted a career. John was solid and set. We began to spin in different directions which led to divorce. I enrolled in UC Davis School of Law and graduated in 1981. The circle rolled me here to Fresno where I practiced law for about ten years. That clear call from my childhood that had become faint, now became a clarion herald. I stopped practicing law and enrolled in The Pacific School of Religion in Berkeley. As a candidate for ministry, I was under the care of College United Church of Christ and was invited to preach my first sermon there. The sermon was about the need to become an ‘open and affirming’ congregation. I remember sweating profusely and being scared to death!

Not counting a brief interim at a small church in Quincy, California, my first call was to the town of Cromwell, Iowa, population one hundred! I served there ten years, and it was a wonderful experience. I met and married a wealthy Iowa farmer. He was a dear man, but I was too liberal for him and his friends and this marriage too ended in divorce.

Called back to California, I served as interim minister at College United Church of Christ in Fresno until a new minister arrived. I went from there to Zion, a Russian-German UCC church in Fresno. The first Sunday a man who was to become a fast friend said, ‘I don’t know if you know, but we are very conservative here.’ I looked him straight in the eye and replied, ‘I don’t know if you know, but I am very liberal.’ I was to be their last minister and they my last church. Zion and College UCC churches became one and I retired.

I was retired and thought everything was going well. It seemed that my circuitous journey was winding down, but it was not to be. The defining moment of my life occurred when my daughter committed suicide in 2014. I sold my house and moved into a retirement apartment at Twilight Haven. It seemed like a wall had come down on top of me. I settled in waiting to die. I learned during those dark days that my odyssey was not finished at all. There are still days when I am terrified of dying and nights when my illnesses seem more than I can bear, but I know that life is a roundabout path whose destination is not certain as it spins toward eternity.

I moved out of Twilight Haven, bought this house, and my journey continues. My faith is not concrete, it is experiential. While I pray to a male God, I know that God is spirit. I know that I am going to die and believe that I will move into God. I believe God is spirit in and through me. Of this I grow more positive with each spin of the wheel.”

5 thoughts on “From the Pews: Lucretia “Lu” Parks”