Big Red Church > News > Getting to Know You > From the Pews: Zorayda Darce 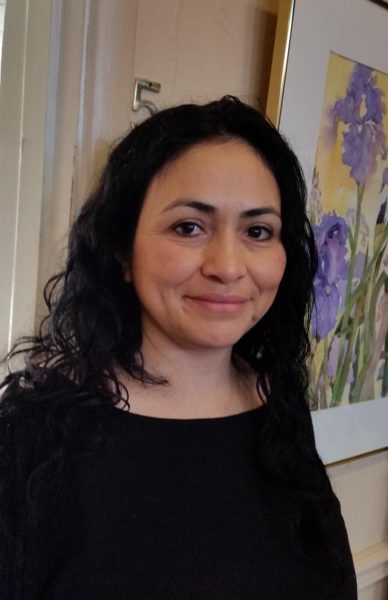 Stepping from our pews this week is Zorayda, a perfect representative of the diversity found at the Big Red Church. She was born in Nicaragua, a Central American country set between the Pacific Ocean and the Caribbean Sea. It is known for its dramatic terrain of lakes, volcanoes, beaches, and beautiful Spanish Colonial Architecture. Thus, her birth place alone makes her a most interesting pew person. I also find her name fascinating. Zorayda can be translated “enchanting” or “dawn.” Her nickname Xochitl means “flower.” So, a literal translation would be “enchanting flower.” To this reporter who loves words, Zorayda is an interesting person even from an etymological standpoint.

“Dale, my memories of Nicaragua and home are colored by politics and civil war. In spite of those violent years of political upheaval, my parents managed to provide us children with a more or less normal lifestyle and my childhood recollections are mostly pleasant.

My mother was and is the bedrock foundation of the family. She made our home a refuge and sanctuary. Her sweetness remains a fundamental element of my childhood. Her humble personality and loving character are the glue that has always held us together as a family. Today she is ill and facing surgery, and I hope to be able to go home to see her soon.

My dad is an ordained Baptist minister. He is my hero. We lived in the city and owned a farm that was leased out to tenants. I guess my favorite memory was going with him to the farm every Saturday and riding the horses. This joy did not come without cost. The deal was I could go to the country and ride horses if I typed his sermons and helped with his necessary paperwork. Dad was a strong and brave man. He was respected and trusted by all of the many factions of that civil war that caused so much havoc in our country for so many years. As an activist he ministered to those who suffered imprisonment and persecution.

We were six children and did everything together as a family. Our home environment was very structured. For example, if dinner was announced to be at six p.m., it was served exactly at that time. If one or all of us were late, we missed it. It was understood and believe you me, we got to the dinner table on time.

My friend Mayra lived next door. She and I along with a host of other children grew up playing in the relatively safe streets of our neighborhood. We collected chalk. I don’t know why, but collect it we did. We rode bicycles and played kickball in the quiet streets. A favorite summer game was to climb the trees that line a nearby river and leap like monkeys into the gentle stream. I remember that there were many children. One family on our street had twenty-three children. We were never lonely.

As the civil war wound down and the political tension grew, my parents arranged for the two youngest of the family—a brother and me—to escape the chaos. My brother went to Costa Rico, and I moved to California. I made that journey in 1994. I spoke no English and traveled alone. I faced a new lifestyle and a totally different culture. It was not the easiest of transitions.

While living in the Bay area, I met and married a man from Jordan. After several years of marriage, my husband decided he wanted to go home to Jordan. I agreed to move there with him, and again I moved into a new world and a culture completely foreign to the Nicaraguan world and lifestyle I grew up in.

Thanks mostly to my father-in-law, my time in Jordan was bearable and life was fairly agreeable. Things got worse, however, as time passed, and I wanted to come back to California. My husband gave me permission to get a divorce, but the price was that two of our children would remain in Jordan with him. As always through thick and thin, my father-in-law was there for me.

Although there was no overt pressure, my husband’s family believed that unless I became a Muslim I would die and go to hell. For seven years, they conspired to save me from hell. This gentle coercion to convert reinforced my Christian faith.

When I came to Fresno, I began visiting Spanish-speaking Christian churches. I was not having much luck in finding a place that fit. My friend Cynthia Stevens suggested that I try the Big Red Church. I did and I liked it. I did not want to be at a place where everyone had brown skin, and at the same time, I did not want to be the only person in the place with brown skin. I realized that I was seeking diversity. I was searching for a family of people who were truly comfortable together, and I found that feeling alive and well in this open and affirming congregation of diverse Christians

Dale, I have found at the Big Red a place where I feel truly loved and believe that we are living what we preach. One last thought, I love children and am currently involved in nursery care which is the icing on the cake for me!