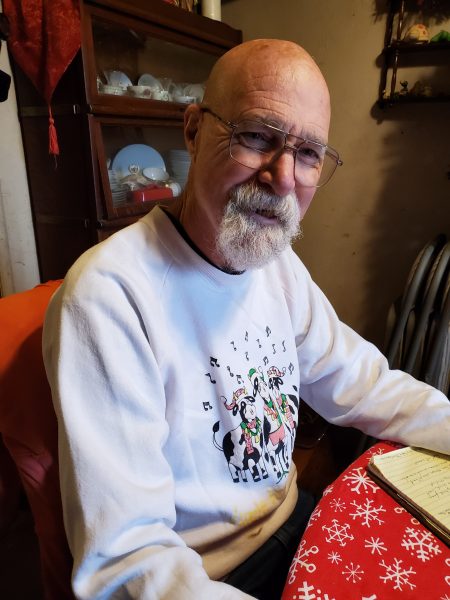 Just after our first column appeared, there was a thank you note in the Grapeleaf to Wade Hobson and Jeff Jones for cleaning the bell tower. I did not know Wade or Jeff. I wrote their names in my little book thinking here’s a story—the Big Red Church may have its own Hunchback of Notre Dame!  I promptly forgot this story until Pastor Raygan mentioned Wade’s recent heart attack. The amusing thing was that Wade was in the choir loft waving as this sad news was delivered. Yours truly left the service that morning determined to feature Wade in our “From the Pews.”

My editor and pew person prospector recruited Wade via email, and the first thing you know, Gayle and I were sitting in Wade and Jeannie’s home snacking on tea and cookies while Wade shared stories with us. I asked about cleaning the bell tower, and he was off to the races.

“Ara Gueguezian was our interim minister and felt called to ring the bell. No one had been up in the bell tower for a while, and our hands-on minister decided to check it out. Up the stairs he went where he encountered a plywood barrier. Not to be deterred, our intrepid pastor lifted the board up and was immediately showered with a downpour of pigeon poop. It was Wade and Jeff to the rescue. Our first excursion skyward revealed Pastor Ara’s assessment had been correct. Fresno’s ever-present pigeons had breached the screen barricades and taken up residence in the tower. Properly protected with coveralls and face masks, the pigeons were driven out and the filth removed with shovels, buckets, and a vacuum. New screens were installed. It was a nasty job, but Pastor Ara got to ring the bell!

Hobson is an Anglo-Saxon surname meaning son of a shoemaker. A popular English saying is ‘Hobson’s choice,’ and the story goes that a stable keeper named Hobson insisted that you could only rent the horse tethered nearest the stable door—thus, Hobson’s choice.

I was born and raised in Santa Maria. Dad was born in Tennessee and migrated to California when he was 21. His ticket was to San Jose, but he never made it to that fair city because the conductor never called out San Joes with the “J” sound, and he was finally put off the train. Mom was from a prominent family in Paso Robles and dad from a not so prominent family in Tennessee and the story of their meeting at a prize fight in Bakersfield is shrouded in mystery. They were married in 1927.

I grew up on the Central coast and the crimes of my youth were committed Pismo Beach and Morro Bay. My dad passed away when I was eleven years old. My favorite recollections of him always find me riding shotgun with him in his old Chevy pickup when I was about five or six years old and dad was a pumper for Standard Oil making his rounds.

While most children have stories read to them to fall asleep, my mother read to me when I was waking up from a nap. I remember her holding and rocking me while she read A.A. Milne’s stories of Winnie the Pooh. I identified with Eeyore the left-handed, depressed donkey. Although I’m not depressed, I am left-handed. Eeyore is still my spirit animal!

Working as a theater doorman, I was attracted to a “chick” standing at the end of the candy counter. That “chick” was Jeannie. We recently celebrated fifty-four years of marriage. There have been good days and bad days, days of joy and days of heartbreaking sorrow. We tolerate each other when we have to and love each other the rest of the time. We agree that we got married for all the wrong reasons and stay together for all the right reasons. We are best friends. We raised four of our own children and a “son” from Zimbabwe.

Some are called to their profession. I worked for the state Employment Development Department for thirty-seven years—half of that time as vocational counselor and half as computer support, but I cannot say I felt called to it. And my passion for technical theater and sound production was never so much a business as a hobby out of control. When I learned that Camp Tamarack was going to be closed, I felt a call to step in as the manager of the camp. I was retired, had the necessary knowledge needed, and the know-how to deal with the political stuff. Unlike Jonah, who tried to ignore God’s call, I accepted this call willingly. I am convinced that this ministry must survive for future generations to provide a safe and nurturing place for even the most disadvantaged children. The core support for this vital ministry comes from Big Red. It is my prayer that my fellow pew members will also feel called to support this ministry not out of duress but willingly.

There have been two miracles in my life. The first was as a child I caught my arm in the ringer of an old washing machine and my mother had to run my arm back out. There was a possibility that I would lose my arm, but I didn’t. The second miracle was my recent heart attack. A major artery was 100% blocked. Immediate action to insert a stent resulted in no heart damage and my prognosis is for complete recovery within six months. That means I will be good to go for Camp Tamarack this summer!”

2 thoughts on “Getting to Know Wade Hobson”