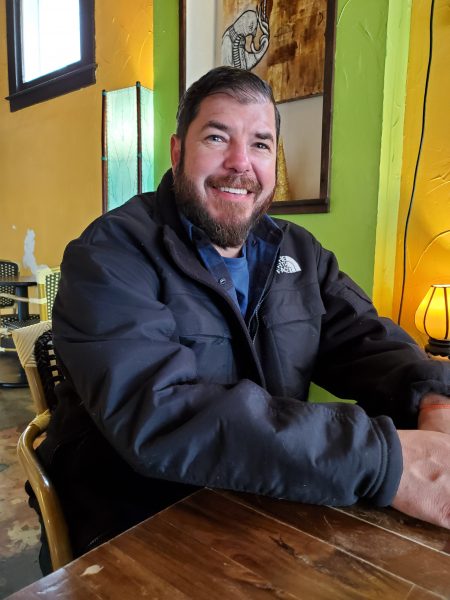 Good afternoon, Big Red friends. I am with Dale and Gayle at Teazer World Tea Market in the Tower district. With another meeting scheduled in the next hour, I was accompanied by my local Office Manager Anna and Felicia, my Director of Communications. We found a big table and settled down for the interview that would allow me to tell what Dale called, “my story.”

Dale had an official website biography that ended with a one sentence paragraph: “Dr. Joaquin Arambula and his wife Elizabeth live in Fresno with their three children.”  Dale preceded to explain that he was looking for a personal picture—more like a Brownie camera snapshot than a studio portrait, so the following is my informal snapshot biography.

It seems to me that the best place to begin is at the beginning and that would be Delano, California, a small town north of Bakersfield whose main industry is agricultural—mainly growing table grapes. The original Spanish word “delano” means of the night or may be translated “dark.”  I was born in Delano and my memories are at the very best “dark” in the sense that I have no clear memories of my beginnings and my first six years. My story begins when we moved to Fresno at age six.

To explain my story, it is necessary to lift the curtain of darkness to even before my birth in Delano. My parents met as students at Harvard University, and my favorite story from that long ago says much about my dad Juan and my mom Amy. It was my dad’s birthday and a girlfriend dared Amy to throw a piece of birthday cake in Juan’s face. To the delight of everyone, she did! As Dad tells the story, he had two choices —either he could hate this feisty, opinionated young woman, or he could marry her. He chose marriage and they became lifelong partners.

Mom remains feisty and opinionated and we all continue to draw support from her strength and ability. Dad remains our inspiration. An original glass-ceiling breaker, he was the first in the family to go to university, the first Latino County Supervisor, a trail-blazer, and champion of his community. Dad and Mom are in reality the beginning of my story.

I am proud to call Fresno my home and my roots are firmly planted in the Tower district. I went to Heaton Elementary School across from Fresno City College, and Edison Computech, and still I felt unprepared when I went to Bowdoin College in Bruinswick, Maine. This feeling persisted and for the first time I felt motivated to help those who had no one else to help them.

Next it was the University of Minnesota Medical School. Following graduation, I returned home and served for ten years as an emergency room doctor at Selma Adventist Hospital. As an ER doctor I saw the underbelly of society and became firsthand acquainted with the acute shortage of doctors and services needed to care for the underprivileged.

I loved being able to help people directly in ER and never wanted to give it up. There is nothing like walking into a room and being able to ask, “How may I help you?”  Standing by a patient’s bed is problem solving at its most basic level. I never wanted to leave that environment but as the years passed, I was reminded how my parents involved me and my brothers and sisters in political campaigns. We were part of the action. We felt empowered and experienced the heady sensation of knowing that we could actually bring about change in our community. Slowly, but surely, I became convinced that in the transformative climate of politics, I could serve more people more effectively than I could in ER. It is true that the hands-on thrill of saving a life is an exhilarating experience, but it is also true that the groundbreaking of a community college in an impoverished Fresno neighborhood will over the years lift untold numbers out of poverty and into functioning members of our community. Serving as a state legislator makes such groundbreaking ceremonies possible and that too is exhilarating.

After an earthquake in Haiti, a friend and I did volunteer medical relief work. It so happened that this friend had a sister. When we came home, he introduced me to Elizabeth and I fell like a ton of bricks. We had one date, a thirty-day tour of Europe, and I was convinced she was the one for me. We were married and have been blest with three wonderful daughters: Avianna, 10, a budding pianist, Scarlett, 7, conquering the violin, and Kennedy, 4, figuring it out.

When I was a young boy walking to Heaton Elementary School, I passed through the beautiful Wilson Island neighborhood and promised myself I would someday live there. That dream has come true, although I did not get to pick the house. Elizabeth called me a couple of years ago and informed me that we had bought a house and gave me the address so I could get home. 😊

Big Red Church is my spiritual home. The most grounding thing I do is take my girls to church every Sunday. I am drawn here by the diversity of people who are to be found in the pews. There is an obvious ambiance I feel each time I step through the front doors. I love the location. I literally grew up across the street. And last but not least, the music is artistic, dynamic, and powerful.

Thank you, Big Red Church for giving me the opportunity to step from the pews and tell my story.

2 thoughts on “Getting to Know Joaquin Arambula”