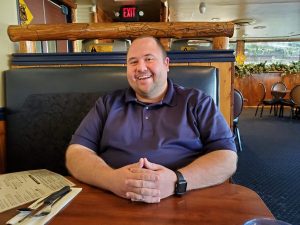 Hello! My name is Andrew. I was born here in Fresno in 1990 which makes me 29 –almost 30—years old. Although you may not recognize me, I have a rather long history and connection to the Big Red Church. My Great-great-grandfather, Norman B. Henderson, was the pastor at FCCF from 1929-1941. My paternal grandparents were married at Big Red and my mother is an active member in the church today. With my credentials established, I will proceed with my story.

I am the child of separation and the product of blended families. While I could wish that I might have had more choices about things, all-in-all, I can’t complain. My folks separated when I was four years old, consequently my memories of family revolve around what is today called “the blended family.”  Both of my parents remarried and I found myself living weekdays with my mother, sister, and later her new husband and weekends with my dad’s new family. The dynamics of joint custody and blended family are, to say the least, different with two homes, four parents, and any number of children. In my case there were five children in my blended family—me and my sister Erin, a step-sister Aleisha, and step-brothers Nick and Ryan.

Grandparents, parents, and siblings, along with multiple pets which include two large Maine Coon cats, several dogs, many fish, two lizards, and a snake comprise the cast of character around which my story must be told. Also necessary for an appreciation of this autobiography is an understanding that this complex cast of characters and family dwellings make the memories less than clear about when and where. My hope is that the mini-stories which follow will flow together and illustrate the positive aspects of life in a blended family.

At the Twain Avenue house with my father’s family, I was never lonely. We built forts in a vacant lot and rode our bikes to Baird Middle School and Fig Garden Village. Great adventures for a shy little boy!

When I was in middle school, mom was into celebrity culture, and we shared People magazine and celebrity stories. When I was about 13 and my sister Erin was 15, the three of us packed up for a vacation in Hollywood. Our goal was to find celebrity homes. Mother was the driver and since it was pre-cell phones with GPS, Erin had a big fold-out map and served as the navigator. I was in the backseat finding the whole process funny.

Because I lived with my dad on weekends, I went with his family to Northwest Church regularly until I was around 16 or 17 years old. Dad was and still is a guitar player in Northwest’s music program. During my high school years, I was active in Awana at Northwest. Awana is a ministry to give children ages 2 to 18 an opportunity to know, love, and serve Jesus. I worked with the third and fourth grade boys in Awana every Wednesday for four years.

My work with Awanas was a rewarding experience for me and probably laid the ground work for my job in the City of Fresno’s after school programs for four years and for the work I have done the last three years for Fresno Unified School District at Ewing Elementary School as a nursery school paraprofessional.

While I did not grow up in the Big Red Church, I went with mom to Christmas eve services. It was mom who told me that Big Red was looking for nursery assistants. That led me to an interview with Patsy Finster and my current Sunday job and for a brief time serving as Youth and Volunteer Coordinator.

My grandparents have played a significant role in my life and my story. There are two sets of them and they all four have had a stabilizing influence on me. My maternal grandparents are Kirk and Janeen. We are very close and I see them once a week. Grandma is everything you could expect from a grandma—soft, loving, and caring. Grandpa is also loving and caring but tends to be stern, strict, and decisive. Grandma is a good cook. She calls Grandpa and me her guinea pigs because she tries out her new recipes on us. She loves people, parties, and family events. She is best known for her Super Bowl parties!

My paternal grandparents are Jack and Brenda—the ones who were married at Big Red Church. Although they live close by now, I see them mostly on holidays. They are both loving and sweet. When I was a child, they owned a motel In Cayucos. It was fun to go there for a visit, stay in their motel, and spend time on the beach. Building sand castles and breaking waves was a child’s paradise.

Other childhood memories are: taking naps in the living room with other children in the lady’s house where I was in daycare and sitting on the carpet at home when I was in first grade watching Nicolodean cartoons and Seinfeld. I was raised on Seinfeld!  Star Wars came out when I was in the third grade and I became a Star Wars nerd collecting Star Wars toys and action figures.

Now my passion is photography. Nature and architecture are my specialties. I like to take photos on the coast and recently took photos in Sacramento at the Court House Park. I enjoy the hunt for a photo. It is a perfect hobby for me because I am fine by myself. I’m still a shy kid at heart!

2 thoughts on “Getting to Know Andrew Fennacy”