Skip to content
The Big Red Church > Church News > Getting to Know You > From the Pews: Tracy Bright 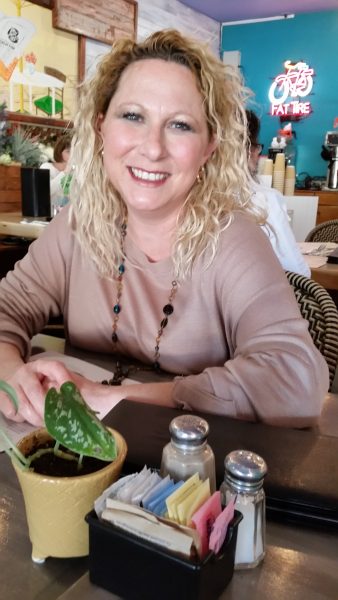 Your “From the Pews” reporter along with Gayle have just spent a delightful evening with Tracy. We had dinner at the Patio Cafe in Fig Garden Village. The atmosphere was great—a small, quiet space with live music from a classical guitar. It was simply the perfect place for our interview. The food was good, the music set the tone, and the conversation and interview just flowed along. We talked, we laughed, and before we knew it, we were through eating and I had completed the interview process. Gayle had captured Tracy’s rich descriptions of some high points in her life leaving the scribe with a smorgasbord of scrumptious stories. With no particular chronological order, the following is a condensed version of the conversation with Tracy. It is my hope that the reporter and notetaker more or less disappear and the Tracy we had dinner with becomes a likable, interesting person that you would enjoy getting to know more than a handshake and “hello” on Sunday mornings.

“I met Joel when I was twenty years old. We dated for four and a half years before he went and asked my parents for permission to marry me. We have been married twenty-two years. For me, it was love at first sight. I remember as if it were last night the very first date at the old Clovis Theater. It was a double feature: ‘The Hand that Rocked the Cradle’ and ‘Beauty and the Beast.’  That was good, but what sealed the deal was that he read ‘Green Eggs and Ham’ out loud to me—just about the most romantic thing that ever happened to me.

My dad was born here in Fresno a first-generation American Armenian. My grandparents were both genocide survivors. Mom was born in Texas a descendant of German immigrants. They were wed in the mid-sixties when it was still unheard of for an Armenian man to marry a white woman. They have been married fifty-five years bound together with a love surpassing all prejudice and cultural differences.

For me, growing up in Fresno was great. My childhood could be a scene from a Saroyan play. We had a swimming pool which made our backyard the summer gathering place for all the neighborhood children. My mother taught Sunday School at Holy Trinity Armenian Church and was a stay-at-home mother. She said that Dad made the money and she did everything else. My favorite memory of Mom is Sunday mornings on the way to church. We were not allowed a lot of sweets, but we always stopped at the Bulldog Donut Shop for a Sunday morning treat. Dad stayed at home Sundays and made a pot of hot soup for us when we got home. I still crave soup on Sundays.

I was the middle sibling and as the only girl, I was without a doubt ‘Daddy’s girl.’

Family, church, and food are the focus and core of Armenian culture. These central characteristics are woven together with powerful traditions. When Joel and I watched the movie ‘My Big Fat Greek Wedding,’ Joel said, ‘That’s us!’  I grew up speaking both Armenian and English. Joel came from a mid-western family, but he was baptized and married in the Armenian church. I sometimes wonder if he is not more Armenian than I am!

We did not have children until four and a half years after marriage. We had developed a clear blueprint. I would work until the first child arrived, stay at home until the second child was in the sixth grade, and then go back to work. We have dinner every night at six o’clock, everyone comes to the table, and we always say grace. We have family structures. We encourage our children to excel at school. Our motto is ‘God gave you a brain, use it.’

The arrival of children in our lives was not the most important thing, it is everything! You don’t know fear, love, or pride until you experience the joy of your own children.

My father was raised without grandparents. Mine have been blessed with them. My dad was always in the backyard, and when Spencer was little, he thought Grandpa lived there.

I think of life as a painting. My prayer is that I succeed in leaving behind an honest portrait of the person I have been. My children, both of them, are just beginning to paint their pictures. Joel and I have tried to build solid frames for them that will last a lifetime as they create their personal portraits.

Today I am watching Georgia become an adult. I am observing Spencer take tentative steps toward becoming the person he is going to be, and I am still developing the picture of my life. My full-time job as a one-on-one instructional aide with a severely physically handicapped first grade boy is adding new dimensions to my painting. I am forever grateful to Mom and Dad for providing me with a frame and canvas.

2 thoughts on “From the Pews: Tracy Bright”