Skip to content
The Big Red Church > Church News > Getting to Know You > From the Pews: Derrol Keith 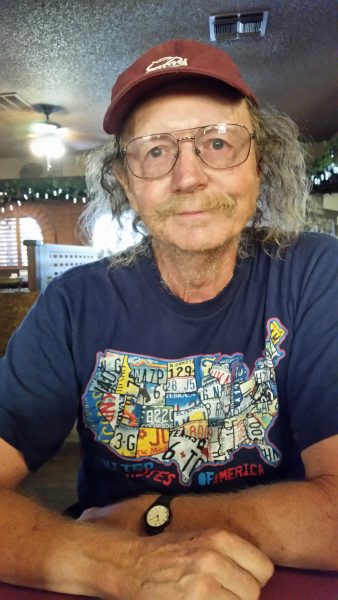 “I think I always hated rules. They seem to be for people who had no place to go, who worried a lot. For me, I just followed my feet. That was my rule. All the rest took care of itself.”

“I just followed my feet” is a quote from Darrol’s novel, Aero. I confess that I have not read the book in its entirety, but I am convinced that this paragraph is biographical in nature.

Darrol is seventy-one years old, and it is this scribe’s conviction that he always “just follows his feet” and never allows conventional mores to dictate his direction or behavior. A poet and a composer, this unique “From the Pews” gentleman is in the midst of composing his fifth opera. From his prolific pen flow in operatic form:  Saint Francis, The Trial of Socrates, The Death of Socrates, Jesus King of the Jews, and now Ghandi. In this work about Ghandi, Derrol hopes with the score to capture the energy of this remarkable man and with the lyrics portray his heart and soul, describing Ghandi as a person of God and the people.

Born in Fresno living near the Manchester Center, Derrol attended Winchell Elementary School for six years of almost constant fights and schoolyard scraps. Junior high found him at Fort Miller and a turnaround in behavior with only two or three school fights. He graduated from Fresno High with a clean slate of no fighting.

While picking cantaloupes one summer near Huron all the guys were playing guitar. Then in high school, he was befriended by a football type guy named Roger who played the guitar and wrote songs. At age fifeteen, Derrol was sure he could write better lyrics, but he could not play the guitar. His mother had sent him for guitar lessons at a Christian music store when he was eight years old. He hated the school, his teacher, the music, and the guitar. These lessons continued for a year and after being hit in the hand with a baseball bat he was forced to give up the guitar. That hated instrument was set down behind the sofa where it remained for nine years.

At a young age he decided that there were two kinds of people—those with short hair and those with long hair. This long-haired young man was awakened when at age eighteen he heard the Beatles for the first time. He bought a Bob Dylan song and chord book and discovered the wonderful world of lyrics and music.

The night the Beatles made their first national television appearance, his mom had to go out. She warned him not to blow out the neighborhood. But, of course, he did!  In Derrol’s words, “That concert opened up a river in me.” That very night he wrote his very first song—the music and the lyrics—in one sitting. Before that week was over, he had written four more songs and the river of creativity continued to flow. He had found something he could do. He recognized the dominate characteristics of lyrics and music flowing unceasingly through his soul.

At this juncture “just follow my feet” became that sure mantra that would serve as a never-failing rule or guide. With lyrics and music ever crying out to be expressed, Derrol followed his feet into a pilgrimage of self-education and creative narrative. He took inspiration from the Beatles, Bob Dylan, Donovan, Paul Simon, and Don McLean. His feet led him to the Junk Yard and that gave birth to the Medicine Show and a time in San Francisco.

As Gayle and I listened to Derrol’s narratives extolling the power of just following one’s feet, we became aware of a parallel theme, something he calls “God inspired.”  His stories are often challenging, but with careful attention they all show God’s hand in his life, and of course, by metaphor all our lives.

The following stories are not meant to be in chronological order, but examples of his not only following his own feet but his conviction that there is a God who inspires and leads him on unexpected paths.

I gleaned these stories from Gayle’s notes of our interview:

“In the late sixties Christians were always asking me if I had accepted Jesus Christ as my personal savior. The desire to find an answer to that question remained hidden in me for ten years before it came out like an egg or a birth. I wrote in poetic form ‘The Testaments of Jesus.’ That was my calling to Jesus.”

“Riding my motorcycle on a dark and deserted street, I had slowed to navigate a hairpin turn when a man stepped out of the darkness, hit me on the head with a pipe, stole my bike, and left me for dead. In the hospital after I was rescued, I vividly remember negotiating with God concerning composing an opera Jesus, King of the Jews in return for restoring my health and eyesight. I recovered and my eye sight was restored except for ten per cent in one eye. And I wrote the opera.”

“God spoke through a friend who way back suggested that if I could write all those lyrics and compose music on my own just think what I could accomplish with an education. Those God inspired words set me on the road to an A.A. degree, a B.A. degree, a M.A. degree, and the tools to successfully follow my feet while all the other stuff took care of itself.”

3 thoughts on “From the Pews: Derrol Keith”