Skip to content
The Big Red Church > Church News > Getting to Know You > From the Pews: Bob McParland 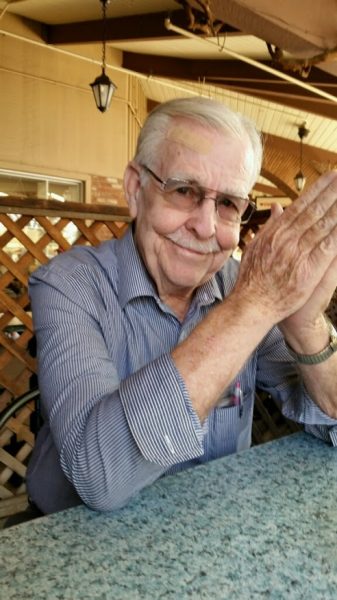 Last Thursday Gayle and I met Bob for lunch at La Boulangerie.  It was a beautiful October day. The blistering summer heat seemed to be behind us.  It was Bob’s lunch break and he insisted on treating. We had Monte Carlo sandwiches.  Gayle & I had potato salad and Bob had onion soup with his sandwich.

Meeting Bob was not a strictly social occasion although it was surely that also.  Bob had agreed to step out of the pews and share his history and story.

After we ordered and the food was being prepared, we settled down to the interview which has morphed into more of a conversation than a straight interview.  The conversation was lively and continued uninterrupted when the food arrived. This interview does not follow a strictly beginning to ending pattern. We were three friends sharing lunch and memories and one thing led to another, not necessarily in chronological order but in a free moving conversation.

Bob noticed Gayle taking notes and asked if she took shorthand.  She replied, “No, but my mom did.” Bob smiled and said, “So did my mom.  As a young woman she attended a business school in Visalia and was still proficient at her shorthand until she passed at age 102.”  And I had my first story about Bob’s mother.

“My surname is McParland, an Irish name, and my family heritage is Scotch-Irish.

When I was seven years old, my dad had bought me a Daisy BB gun and on a visit to my grandparent’s farm, I aimed up in a tree and killed a mockingbird.  Mind you, I had never shot anything and standing in Grandma’s front yard, I had killed a living thing with my gun. With that dead mockingbird lying at my feet, I was in a state of shock and very near tears.  Mom came out and comforted her boy explaining that it was all right since Grannie did not like hearing that mockingbird singing at night.

I was born in San Francisco and lived there until I was two years old.  We then moved to Burlingame and lived there through the fifth grade. When I was four or five, I hit a bump while riding my tricycle.  The handle bar jammed into me and caused a hernia. They took me to St. Mary’s Hospital in San Francisco for surgery. I don’t remember much about that except that I was not supposed to drink water.  The father of the boy in the bed next to me sneaked me a glass of water that tasted so good. Ironically, they were from Fresno.

The dampness of the Bay area caused me to develop asthma.  It was so bad that the doctor told my folks they needed to get me to a drier climate.  We moved here to Fresno when I was ten years old and ready to start sixth grade. In Burlingame I could only ride my bicycle a block or so without having to stop to catch my breath.  It was a new world to me to be able to play outside with no asthma!

Mother was the stalwart in our family and faced all problems stoically.  Raised a Roman Catholic, she left that church and remained unchurched. Dad had no spiritual leanings.  I did try going to Sunday School a couple of times, but there were just a bunch of rowdy kids and I never went back.  As a Fresno High School student, I went to the Big Red Church’s Sunday evening forums, but that was the extent of my experience with churches.

After graduating from high school, I enrolled at Fresno State.  Dad got sick and I dropped out to help with his business which was eventually sold.  Next it was to U. C. Berkeley until dad again needed my help with his builders’ hardware business.  I was married then, drafted, and divorced with no children. I returned to U.C. Berkeley and finished my degree in Business.

I married a second time for twelve years to a woman who had three young children.  We had three more including a set of twins for a total of six kids. It was with these children in tow that we started coming to the Big Red Church.

Looking for a job, I went to work for A & M Carpets where I worked for seventeen years.  Thirty-one years ago, I opened Valley Rolls and Remnants at McKinley and Blackstone. We have just relocated to Blackstone and Lansing with a staff of eighteen people including salesmen, installers, and office personnel.  We sell wall-to-wall carpeting, area rugs, laminate and wood flooring, and some ceramic tile.

In high school there was a group of ten of us that ran around together.  Nine of those ten knew what they wanted to do. I was the odd ball and stumbled around for several years.

In my early twenties a good friend and I bought a sailboat and sailed from St. Thomas running into a bad storm.  We tried to weather it but ended up ship wrecked on a deserted island called Dog Island. After four days some native fishermen saw smoke from our fire and rescued us.

I plan to keep working for another two or three year and dream of passing on the business to my son.  I am married to my business, so I am happy when it is doing well. I enjoy reading and am currently reading Apostles of the Revolution.

Chief on my bucket list when I retire is to get back to fly fishing.

What I cherish about the Big Red Church is the social relationships I have there.

One thought on “From the Pews: Bob McParland”