On the last Friday of every month, members of the Big Red Church Pantry gather for what is called Free Food Friday. From a closet in a hallway off the Fellowship Hall this project has flourished into a thriving ministry whose mission is to feed the hungry. 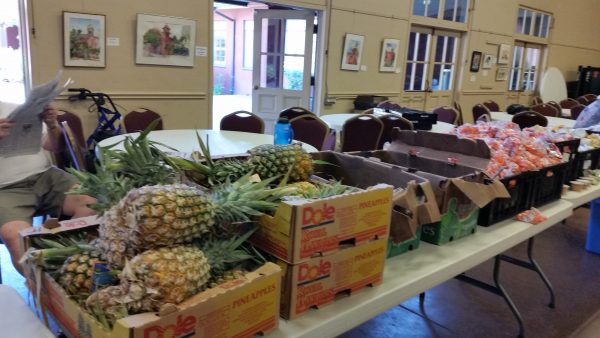 Your “From the Pews” scribe has always been particularly interested in the workings of this group of dedicated Christians. I have watched in amazement the passion with which they single-mindedly concentrate on doing what they do. This passion to feed the hungry makes for excitement in their Pantry meetings as they discuss how to proceed and best serve the needs of the hungry in the community.

On the last Friday of August, Gayle and I strolled into the Fellowship Hall. It was just after 8:30 a.m. and there was a line of folks already forming outside the door. A suppressed air of excitement was palpable as we entered. Gayle joined a host of other worker bees who were buzzing about anxious to get started filling bags with food. They were there to work and I was there to watch. 😊 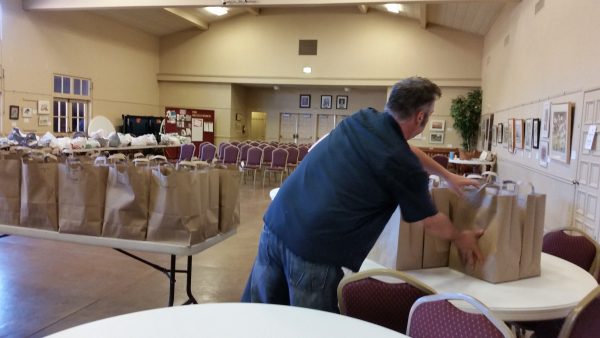 This is where the apparent chaos begins on some signal undetectable to me. These workers spring into action. Paper bags with handles appeared as if by magic. Talking and laughing, this extraordinary group began to move along the supply tables loading the individual bags. Try as I might, I could see no organized direction. I watched Gaye move along and fill her bag. Then she put it on a cart which also appeared seemingly from nowhere. She then returned to the beginning and started filling another bag as did the other baggers. Round and round they went like an assembly line.

To add to what appeared to this observer a state of total and complete chaos with no apparent directions, some of the men peeled off and took the bags on the carts to a row of long tables which I learned later was the staging area for the actual food giveaway that was to begin at 10 a.m.

While all of the above was transpiring on the bag-filling side of the supply tables, another chaotic scene was being enacted on the opposite side of those tables. Boxes of a large variety of groceries had been stacked on the stage in preparation for this day. In a narrow corridor created by the stage and the supply table, these foodstuffs were taken down by volunteers, opened, and placed in order on the table so the baggers could keep moving along filling their bags to be moved on to the staging area. There was a constant call for more food as the baggers moved along the table—more tuna, more loaves of bread, we need rice here, we are running out of canned tomatoes! 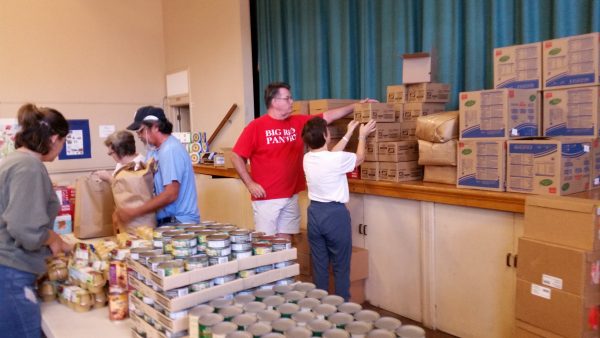 It turns out that this was a big day. There were two shopping bags of food for each client plus fresh fruit and vegetables for the clients to add to their bags. I believe the Pantry fed 90 families on that chaotic Friday. That means they gave away 180 bags of groceries to the hungry who came through those doors into Fellowship Hall. In addition to that, 88 bags of groceries were taken to 44 families whose children are enrolled in the Headstart school on the Big Red Church campus. That makes a total of 268 bags of food given away on that busy August day.

Okay, here is the result of my watching the workers. Of the group I observed, I saw no one NOT working—with the exception of this watcher. There did not seem to be a distinction between labor and management. I am sure that much organization and preparation took place, but in its chaotic way, groceries were unboxed, put in order on the supply tables, packed in bags, and delivered to the staging areas all with no apparent order or management direction.

When 10 o’clock rolled around, the doors were opened and in came the hungry. Magically, there were volunteers waiting to greet the folks as they filed in. The paperwork was dispensed with and the order of the apparent chaos revealed itself to my unbelieving eyes. There were helpers at the staging area giving directions and assistance. Some folks stopped by a table with pamphlets and information that might be helpful to them. At another table—for the first time—was a collection of children’s books to attract the children who tagged along with their parents. It was a joy to watch the faces of those innocent children light up when they understood that they could choose a book to take home as their very own.

The rush was over by 11 a. m., but stragglers continued to come until the doors closed as noon. I ate a pastry and drank coffee provided by someone for the workers—which meant everyone.

Later I was reminded of the creation story. It seems that chaos was on the face of the earth until God rolled up his sleeves and got involved in turning the chaos into order. This sometimes-cynical old man watched chaos turned to order. He watched in awe as disciples of Jesus passionately obeyed his command to “Feed my sheep.”

Breaking news! Just in: We have just learned the September Free Food Friday giveaway set new record—more clients, more volunteers, and fresh meat in the form of whole turkeys and chicken packages. This is the breakdown:  144 heads of households received 288 bags of food. This translates to 531 fed at the cost of $1,079—about $2 per person.