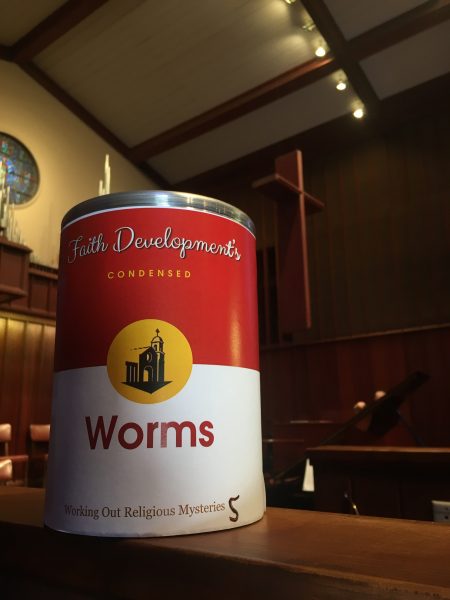 From the Faith Development Vision Group

“Did the resurrection literally happen, or is it just a symbolic story?” That’s the question we’ll take up in the first meeting of our “Can of Worms” group next month.

Plenty of people seem to believe that the answer to that question is obvious, and they would only ever ask it rhetorically. Some would repeat Paul’s declaration to the Corinthians: “If Christ has not been raised, then our proclamation has been in vain and your faith has been in vain.” Others would remind us that extraordinary claims demand extraordinary evidence, and then argue that the evidence for a literal resurrection is less than extraordinary.

But a few of us are dissatisfied either way. How could it possibly matter, even if literally happened? Why should one man returning to life be anything but a curiosity? And if the resurrection did not really happen, then why have Christians made it into the linchpin of the world? What prompted Paul to write that faith is in vain if Christ was not raised? What was he talking about? Should it still matter for people today? How can we know?

Paul wrote that letter to the Corinthians sometime in the 50s, in the middle of the first century. It is one of the earliest texts in the New Testament, and it ought to be reliable, right? But Paul never met Jesus in the flesh, either before or after the crucifixion. So why is Paul the go-to guy on the importance of the resurrection? Did he make it up?

Some of us would have turned back by now for sure. Who questions Paul’s truthfulness in church? The rest of this little essay would be a series of assurances, reinforcing the certainty and unquestionability of the resurrection. Or it would be a curt dismissal in favor of action and getting something done. We might allow ourselves a brief, blurry glimpse at a dimly apparent middle path, but then we would move along quickly. And if anybody were to be dissatisfied by that, well, we would leave them there alone with it. This is church, and we are all certain here—wrestle with doubt on your own time. (Or: this is the modern world, so come to your senses and do some science!)

Not here at the Big Red Church. Here, we are open and affirming, and we mean that broadly: we affirm the diversity that exists among us, we stand with those who suffer isolation and alienation, and we celebrate the variety of perspectives that enrich us in ways that we might not predict or envision. (At least, that’s what we print in the bulletin every week.) If the church is not a safe place to wrestle with stuff that gets under your skin, then how safe can it be? If some questions cannot be asked, then how strong are we, really?

One thought on “Can of Worms: Resurrection”